Hanly evokes a hyper-connected, troubled world through the symbol of an eternal tree 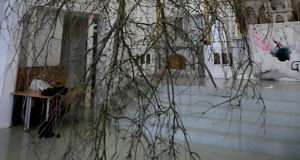 Tree, by Joe Hanly, during the process of installation in the Highlanes Gallery, Drogheda

What is it?
Tree is an installation by Joe Hanley.

How was it done?
The essential ingredient is an uprooted, 30ft oak tree. In its initial incarnation in the atrium of Temple Bar Gallery and Studios in spring 2018, Hanly suspended the upside-down oak tree through the central void linking the floors of Temple Bar Studios. His inspiration was an ancient Hindu text, the Katha Upanishad, which speaks of “an eternal tree called the Ashvattha (the tree of life in Sanskrit) which has its roots above and its branches below”. It sounds like a variation on the World Ash of Norse mythology, a tree that links heaven, earth and the underworld. Given the impetus of his work in general, it is fair to see the installation as a representation of our contemporary digital world.

Where can I see it?
Tree is the centrepiece of Disruptors, a group exhibition at the Highlanes Gallery in Drogheda, Co Louth (presented on the occasion of Drogheda Arts Festival but running until June 29th, highlanes.ie) curated by Joe Hanly. He was invited to devise a show around his Tree piece. The other artists involved are Robert Armstrong, John Byrne, Felicity Clear, Jingze Du, Hannah Fitz, Marie Farrington, Kevin Gaffney, Cliona Harmey and Gary Reilly. The works of this diverse group share a quality of “disruptive innovation”, Hanly suggests.

Is it a typical work by the artist?
No, it is not typical. Hanly is a founder member of Temple Bar Gallery and Studios and became a lecturer in fine art at DIT (as it was then). He was born in Dublin, but with strong family connections to the southwest, studied at NCAD and went on to found a screenprint workshop with Danny Courtney and Brian Maguire. In the original Temple Bar studios, established in 1983, he again worked with screenprint in The Print Studio he established with Robert Armstrong, as well as pursuing his own work, which has consistently combined elements of printmaking and painting. Posters designed and produced by The Print Studio, publicising exhibitions, theatrical productions and other events, were recently exhibited in the Atrium spaces at Temple Bar Studios.

Quite early on, Hanly’s mixed media works picked up on and indeed anticipated the state of hyper-connectivity – and disjuncture – now familiar given our experience of the combination of digital technologies, smartphones, the internet, social media and more. His 2012 exhibition at The Dock in Carrick-on-Shannon, One of its Legs is Both the Same, explored how, in the midst of ever-greater connectivity, disconnection, separation and failures of communication persist and increase. The work suggested that disruptive technologies are not necessarily a good thing and might have negative impact.