Exploring the links between Islamic and Celtic art 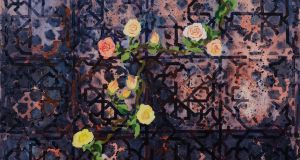 Anne Korff, In Memory of the Last Gardener in Aleppo. Burren College of Art

In 2002 the artist Anne Korff went travelling in Morocco. Korff is German but, through chance and circumstance, was born in Poland in the last year of the second World War and she has been based in Ireland since 1977, having studied art in Berlin. In 1982, she moved to the Doorus peninsula in Co Clare, near Kinvara, and has lived and worked there since. A keen walker and researcher, with an interest in history and archaeology, she relished the richness of the local terrain.

She established a publishing company, Tir Eolas, to produce a series of beautifully illustrated, annotated map guides to Kinvara and areas of the Burren (the O’Brien Country, Ballyvaughan and Kilfenora) and the adjacent Kiltartan country of south Galway.  As with everything she does, the map series arose from her detailed, passionate interest in the subject and the maps are labours of love (some are still available, locally). For the past 10 years and a little more, Korff has devoted her energies to painting – apart from other perpetual pursuits, including gardening and walking. When she travels, and she is a keen traveller, she travels solo, carrying everything in a backpack, walking and using public transport.

In Morocco, she was struck by the richness of Islamic art in a way that she had not previously been. Its symmetries, rhythmic patterning and non-representational nature engendered a mood of calm, meditative relfection. She doesn’t belabour the point, but it was for her a welcome contrast to the high drama of Christian iconography in the mainstream European tradition. At the same time, she began to detect points of consistency in the symbolic motifs extending from Islamic through Christian and Celtic art. This realisaiton instilled in her the idea of a continuity extending from East to West and vice versa, rather than the commonly emphasised notions of difference and opposition.

In Morocco, staying with a Berber family in the mountains, she also became aware that practical changes, including the widespread importation of food staples, were gradually altering the nature of local life and communities.

Some years later, starting from the European side of the Mediterranean, she travelled from Sardinia to Tunisia, where she found the atmosphere uneasy and unsettling. The following year, 2009, she embarked on an ambitious two-month backpack journey through Turkey, making her way from west to east, spending time in a Kurdish region, close to Syria, but her plans to travel on from there did not work out.

Even as she began to make paintings exploring her intuitions about the East-West overlaps and interconnections based on her travels and observations, a series of tumultuous events was unfolding in North Africa and the Middle East, driving a migratory crisis that had world-reaching implications. As she went through her daily life on Doorus, hearing accounts of the horrific destruction of the war in Syria and the refugee crisis, Korff felt that rather than merely thinking about the underlying cultural questions, she should look for a practical means of involvement.

Attending a local event, she heard of a group working on the Greek island of Chios since 2015, CESRT, mobilising volunteers to deal at first hand in a variety of practical ways with regugees who managed to survive the perilous sea journey. She was one of a group of 10 volunteers from Kinvara to travel to Chios and work with refugees. Korff worked there for a month (volunteers finance their flights and pay for their keep). It was hands-on and direct and, Korff notes, Chios is one of the better arrival points, others are even more stretched beyond capacity.

The refugees who arrive have absolutely nothing, she explains. They are wet, exhausted and weakened. They face a survival challenge with leaky tents, constant overcrowding, uncertain facilities, cloggingly muddy conditions, and they are in limbo. At some unknown point they will be, as it is charmingly put, processed. The CESRT volunteers try to ease their path from initial contact with the authorities to that eventual processing. Her fellow volunteers, she says, were brilliant, wonderful people. She cites a group of Scots who were, she recalls, all over 65 in age, arrived with a cache of donated clothing, and worked tirelessly.

Korff’s paintings are based on the reassuring grid of underlying symmetrical patterns – made using linocut blocks – together with a layered, luxurient richness of colour. You can see her point about the correspondences between the patterns of Celtic illuminated manuscripts and stone-carvings and Islamic art. But in East meets West, the integrity of pattern is repeatedly disturbed and on occasion shattered.

While the piantings are beautiful, they are also what she describes as “crunchy”. They have a tough subtext. Motifs including shells and flowers recur. The sea seems to wash over and submerge the ordered world represented by the intricate patterning. Voids open up. In a space of what feels like infinite loss, flickers of hope appear. Korff reasonably enough envisages blossoms as symbolising hope. The shells, she feels, equate to people whose protective casing has been broken leaving them intensely vulnerable. Thinking in colour, she sees violet as the colour of wishes.

To her surprise, her contact with people in extremis, people with nothing except memories of a lost past and the most tentative of hopes for a possible future, drew her back to her early childhood in postwar Germany. Not that she is comparing her situation with theirs. Rather she is thinking of the children. She can recall a deeply troubled world, knowing she was oblivious to the context at the time. Children, she notes, are like sponges. They absorb everything and, even though they are unaware of its meaning and significance, the experiences shape them in ways they may only come to understand much later, if at all.