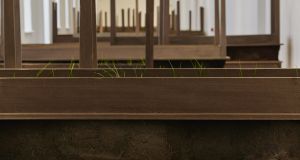 Internationally, Doris Salcedo became established in the 1990s among the vanguard of a number of artists, especially female artists, from diverse geographical backgrounds. Their work had the effect of shifting artistic dialogue away from, as the theoretical discourse puts it, the centre to the periphery – or peripheries. That is to say, rather than simply emulating a given, dominant cultural model, promulgated by a central authority, artists increasingly felt able to articulate difference. Gender, identity, cultural diversity and post-colonialism emerged as significant, generative areas of subject matter.

Salcedo was born in Bogotá, Colombia, where she now lives and works. After first studying art in Bogotá, she spent several years in New York where she obtained an MFA. She was also awarded a Guggenheim Fellowship. At which point, rather than becoming assimilated into the New York and international art world, as you might expect in a conventional career trajectory, she returned to Columbia to teach and work.

Visit Acts of Mourning and it is almost immediately apparent that while she draws on aspects of mainstream modernism – especially minimalist sculpture – she is not defined by it, and in fact radically transforms it. It’s also apparent that the work of Christian Boltanski is a good point of reference for what she does.

Though he was born in France in 1944, in the latter part of the second World War, Boltanski went on to express in a disturbingly vivid way the horror of the Holocaust, and other historical acts of mass violence, through the use of everyday items, including stacks of worn clothing and anonymous family photographs, often marshalled en masse. The clothes are material relics that evoke absent, lost people. Their sheer, ordinary immediacy cuts through the insulating comfort of aesthetic distance.

The same can be said for Salcedo’s work. “I work with materials that are already charged with significance,” she is quoted as saying, “with a meaning they have acquired in the practice of everyday life”. They include items of domestic furniture, garments, shoes, concrete, soil and rose petals.

Over the years she has explored several variations of a basic strategy while also returning to, for example, her consistently powerful Furniture Works.

She has also continually sought first-hand contact with those affected by the violence that always lurks behind her work, not so that a work will, say, document a particular atrocity, though it will memorialise the experience of victims. But in making an artwork, she has said, while an individual’s experience is always a point of departure, “I must maintain a distance in order to leave that person intact, untouched”. It is an important point.

Much of the power of her work has to do with the fact that it occupies what she eloquently describes as “the paradoxical terrain of art” as opposed to being, say, reportage.

The largest installation in her exhibition, Plegaria Muda (or Silent Prayer), dates from 2008-2010 and occupies the extensive length of the first floor eastern corridor. In it 28 pairs of oblong tables, one atop another, with a mixed layer of soil and concrete sandwiched between, are arranged along the corridor. While the sizes vary, the wood used, from demolished buildings in Bogotá, is uniform and each piece is ominously coffin-like in its proportions and the upended legs of the upper tables are unnervingly like outstretched limbs.

Salcedo’s impetus for the work was her contact with the families of victims of a disgraceful event in recent Colombian history, when soldiers executed innocent civilians to collect a bounty offered by the government for the bodies of guerrillas. Between joins in the wood, blades of grass sprout from the sandwiched soil, a hesitant note of optimism, perhaps.

A Flor de Piel (a vernacular Spanish expression that equates with wearing your heart on your sleeve) II from 2013-2014 is another quietly unsettling work, a river-like tapestry of countless rose petals, preserved and stitched together and laid on the floor, that seems to flow through three rooms. It’s a muted red in colour but inevitably one thinks of blood. In fact Salcedo describes the work as a shroud rather than a tapestry and her starting point was the ghastly story of a nurse who was kidnapped and tortured to death during hostilities in Colombia.

Several examples of Salcedo’s Furniture Works are included. In these, she takes ordinary pieces of domestic furniture – wardrobes, cupboards, lockers – and fills them with concrete. Their functions are cancelled, but also they are weighted with impenetrable blocks of pure loss, palpable absences. The confluence of everyday life, concentrated, impenetrable density and paradoxical nothingness make them exceptionally effective works of the widest relevance.

Equally, Tabula Rasa, an installation from just last year, is remarkable. Five workaday well-worn wooden tables occupy a room. At first glance, nothing seems amiss. Look more closely, and oddities and discrepancies emerge. The work’s origins lie in Salcedo’s encounters with survivors of sexual violence inflicted by armed men. Recurrently, the feeling was expressed that one can never reconstitute the self that existed prior to traumatic experience. Each of the five tables was smashed to pieces. Then the pieces were carefully glued back together and reassembled into their original form, but what we see are in a sense fragile facsimiles, apparently coherent structures that have been irreversibly changed, their functional capacity undermined.

Salcedo’s work has an austerity about it, and it can seem almost innocuous in its quietness. But make no mistake, it lodges in your mind, and it will stay with you.

Flash Gordon at 40: The greatest superhero film ever made?
8