RHA Annual: No wallflowers at this rowdy art party

With 600 pieces to fit in, famous names jostle for space with newcomers, but there’s no one at this party you wouldn’t be happy to go home with 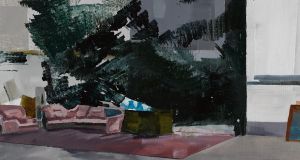 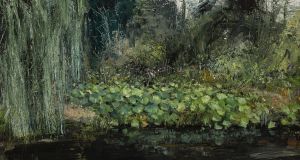 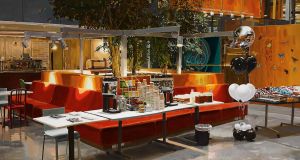 If art exhibitions can seem formal affairs – where works hang primly on white walls with plenty of space in between, or sit austerely on plinths exuding an aura of potentially priceless worth – the RHA Annual is more like a great big rowdy art party.

Where else, save perhaps in your own home, if you’re that sort of collector, will you see the work of famous names jostling for space with newcomers, double-hung or reaching for the ceilings? After all, there are 600 pieces to fit in, chosen from a field of more than 2,500. With that in mind, the Annual becomes the perfect place to take the temperature of art in Ireland and, even if your budget doesn’t run to collecting, to indulge in games of What Would I Buy?

In this art party it seems that size matters and, paradoxically, the smaller the works, the more powerfully potent they seem

Buying and collecting seems to have informed the works on show: they’re very “wantable”, and figurative art predominates. Yes, there are some brilliant, and frequently very bright abstracts, notably by Richard Gorman, Aoife Scott and John Cronin; and Alice Maher’s hand-squelched chrome-painted pieces, lined up under the title Vox Sirena, are delicious; but there’s an overwhelming sense this year of the landscape as muse. While it’s true that corporate buyers have tended to large abstracts that cover a lot of wall space in enormous offices, a turn to the real is a sure sign that people have their chequebooks out again. Still, this comes with a warning: thinking too much about the market can seriously cramp an artist’s style.

Donald Teskey’s trio of green-hued canvasses are rich and lush landscapes to get lost in. They hang in a nice pairing with Eithne Jordan’s restrained paintings of that quintessentially Irish rural-suburbia. RHA president Mick O’Dea, better known for his portraits and War of Independence painting project, has been turning his brush to the rural too, to pleasingly rugged effect.

Martin Gale’s pair of equine paintings are delicious. In Bloodlines No 2, a horse stands in a field, gazing out at one of those “coat hanger horses”, painted at the gallop, legs at full stretch, in the way they painted horses before Eadweard Muybridge showed the world what horses really did when they let rip, back in the 1870s. Maybe this is what horses dream of, when out to grass? More are on display in Gale’s current show, at Taylor Galleries until June 2nd.

In some spots, there’s a sense of continuity, giving the lie to the idea that the best contemporary art is all about the new. Gary Coyle is still swimming, and doing it beautifully too. Diana Copperwhite continues to make rainbows, and there’s nothing wrong with that either: she’s a painter growing in power with every passing year. Una Sealy’s well-observed explorations of the domestic make you want to whisper “don’t ever change . . .”

Downstairs, in the space dedicated to portraiture, the challenge is to take it all in without gravitating to recognisable faces, or lurching between the names on the labels; but if this is an art party, it’s really well worth getting to know all the guests. Emma Stroude’s Twelve and a Half is a stand-out, as is Laura Cronin’s Life Study 18, the former a simple, yet arresting image of a young girl, the latter a classic nude. In each you feel that stepping into the canvas and beginning a conversation with the subject is a distinct possibility.

Tellingly, each of these works is small. In this art party it seems that size matters and, paradoxically, the smaller the works, the more powerfully potent they seem. The smallest of all is Catherine Barron’s O Master, the tiny ink-on-metal painting of a dark-haired woman against a grey background, being just 6cm by 5¾cm. The label below the work, which dwarfs it, announces that it costs just €4. At this price, it’s no surprise the work has already sold, but the text announces: “The maker of O Master respectfully requests that whoever buys the work of art does so with the understanding that it must never change ownership at a price greater than that at which it was acquired.” If it does, the artist warns, “the internal value of the work will be nullified.”

Can an art work escape the market? Can an artist dictate value beyond that initial sale? The famously grumpy minimalist Donald Judd certainly tried, back in 1990, when he took out an advert in Art in America, publicly withdrawing the aesthetic quality and content of one of his works, because he was pissed off at an action of the work’s owner, collector Giuseppe Panza. I suspect Panza got over it, and also that the owner of Barron’s work will enjoy the stipulation as a talking point, but at the end of the day, adding a layer of conceptualism to something so clearly figurative seems superfluous. More interesting are the lines or strings hanging from the figure’s hands. Is she holding something? Or is she a puppet, with something, or someone, pulling her strings? The internal mystery is much more satisfying. On the subject of mysteries, I defy anyone to crack Janet Mullarney’s Confabulating, a sculpture that involves sponge, wood, ink and acrylic, but I promise you you’ll have lots of fun trying.

Elsewhere, Conor Walton expertly shows that not all portraits have to be of people or animals. His Sliced Pan breathes life into bread – truly a transubstantiation. The taming power of the small appears again on the stairs, where you can go from jewel to jewel, wanting to own (almost) everything. There’s Gabhann Dunne’s rainbow of a bird (Migrant), alongside a lovely pair of abstract landscapes (Achill I and II) by Vera Klute. Simon English, Stephanie Deady and Molly Douthit are also worth stopping for. On a larger scale, Colin Martin’s painting of Facebook’s Dublin office implies an intriguing story: all bright celebration yet with the people oddly absent.

In the main gallery, four paintings by Patrick Pye, who died in February, and another four by Stephen McKenna, who died a year ago, are glowing testaments to the vision and talent that has been lost. If the RHA Annual is a rowdy art party, where realism is back in fashion, and painting is very much to the fore, it’s also a party that you’d want to go to; full of interesting ideas and eye candy, but where there’s also a quiet space for ghosts and memories, and a toast or two to those now passed.