Drawing Dublin, at the National Gallery of Ireland, thoughtfully conveys the essence of the city in terms of place and personality 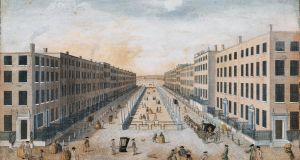 Mention Dublin abroad, as far abroad as you like, and there’s a fair chance that the response will be: Ah, James Joyce, or perhaps Ulysses. Never mind that Joyce’s Dublin is a reimagining of the city he knew. In the vast, heterogeneous fiction that is Ulysses he managed to assimilate it, to make it Joyce’s Dublin forever after.

No one in the visual arts managed a comparable all-encompassing feat, though there are some partial examples. They might include Jack B Yeats’s paintings of Dublin life, exemplified in The Liffey Swim, and James Malton’s series of 25 etchings and aquatints of views of Dublin, published towards the end of the 18th century and endlessly reproduced since.

Malton is generously though not at all predictably represented in the National Gallery’s Drawing Dublin, a quietly absorbing exhibition that amounts to an open-ended portrait of the city. As the word Drawing in the title suggests, it is graphically based. Curators Anne Hodge and Niamh MacNally had the NGI’s extensive works on paper collections at their disposal. They have produced a thoughtfully rounded show that, without any pretence at being comprehensive, conveys the essence of the city in terms of place and personality, the evolving, expanding physical fabric and the spirit and character of its inhabitants.  The diversity of the material employed lends a multi-dimensionality to the experience, from John Rocque’s Plan of the City of Dublin and Environs from 1753 to Michael Healy’s eloquently succinct watercolour snapshots of Dubliners, briskly sketched in St Stephen’s Green during his lunch breaks from his job at the stained glass workshop, An Túr Gluine, in the 1930s.

If Healy’s character sketches are a welcome revelation – the gallery has about 50 of them in all – so too are the drawings Ralph Sallon made in Dublin. Sallon, generally recognised as one of the finest caricaturists of the 20th century, was born Rachmiel Zelon in Poland in 1899. The family – Jewish – fled the pogroms and settled in London. From his early 20s onwards, Sallon was continually in demand as a newspaper and magazine caricaturist. Which is what brought him to Dublin, in the late 1940s, where his subjects include Mrs Guiney and Joseph Reukli, manager of Jammet’s Restaurant. His drawings are crisp, expert and accord fully with his conviction that caricature should illuminate personality “without cruelty or unkindness”. He died just short of his 100th birthday. In 1997 journalist Tony Gray presented 74 sketches by Sallon to the gallery.

And there is no escaping Joyce, and Ulysses, even if the references are oblique. Harry Kernoff’s carefully detailed, annotated line drawing, Davy Byrne’s Pub from the Bailey, Duke St, is a study for a subsequent painting. As Hodge points out, Leopold Bloom drops into Davy Byrne’s “for a gorgonzola sandwich and a glass of burgundy”.

Kernoff, famously opinionated, was as an artist stylistically restless though anchored to realism of varying kinds, and at his best when most straightforwardly realist. Though not born in Dublin, he is unmistakably a Dublin painter. Several other of his sketches in the show, including views of a Traveller encampment at Dolphin’s Barn and houses on the Grand Canal at Clondalkin, see him in a notably relaxed, informative mood.

Another quintessentially Dublin artist is Joseph Tudor, active in the first half of the 18th century. He lived on Dame Street. Several topographical views, including those by Francis Place, locate the city in its landscape. However, one of the most disconcerting views of 18th century Dublin is an engraving by John Jones from a work attributed to Tudor.

It is an architectonic perspective view looking northwards along Sackville Street and Gardiner’s Mall, now O’Connell Street. What is extraordinary is how modern, as in modernist, the buildings and mall appear in their geometric uniformity. It has been suggested that Jones’s engraving is from a study by Tudor, which was in turn based on a design drawing by architect Oliver Grace. The bottom line is that in Jones’s engraving we are looking at an idealised perspective and not an accurate representation.

Almost every image in Drawing Dublin opens a path into background story. For example, there is Mary Granville Delany’s drawing of a grove in the garden she and her husband, Dean Patrick Delany (a friend of Jonathan Swift) were making at Delville. Later, some time after she had been widowed, she embarked on making the cut paper flower collages for which she is justly famous. More, the garden she and her husband created became the National Botanic Gardens.

Hodge points out that Sarah Purser’s fine portrait drawing of a Mrs Moore cut across class expectations. Purser’s home, Mespil House on the Grand Canal, was close enough to Mrs Moore’s at 24 Power’s Court. But the courts were built to house the workers who served the privileged inhabitants of the Georgian terraces and, indeed, Mespil House, and we don’t know how Purser came to make her portrait.

Malton’s views of Dublin are ubiquitous to the point of invisibility, which is a shame. The inclusion of several larger ink and watercolour drawings, with slight though insignificant differences from the prints, should encourage renewed attention. Cities change for many reasons, in ways minor and major.

George Petrie made a watercolour study of a windmill that stood in Rathgar Quarry, for example, both long gone: the windmill pumped water from the quarry and fed it into the Dodder, the quarry is now Herzog Park and Rathgar Tennis Club. Dublin’s history is relatively peaceful and Malton’s views are mostly recognisable – the Customs House, St Patrick’s Cathedral, and St Catherine’s on Thomas Street. Were the urban spaces as sparsely occupied and relaxed as he depicts them? Probably not. An architectural draughtsman, he was good at buildings but knew he was hopeless at drawing people. Drawing Dublin manages to find the right, enriching balance between places and people.

The Volunteer by Jack Fairweather: the hero who first exposed the Holocaust
10