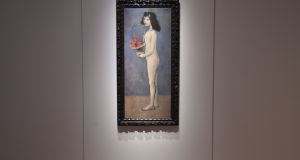 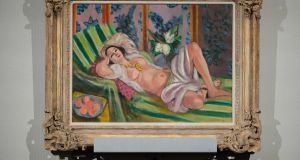 Henri Matisse’s Odalisque couchee aux magnolias on display during an auction from the collection of Peggy and David Rockefeller in New York. Photograph: Julie Jacobson/AP Photo

With $115 million, the winning bidder for Fillette a la Corbeille Fleurie (Young Girl With Basket of Flowers) at Christie’s on Tuesday night took ownership of one of the most expensive Picassos ever sold.

Included in the price: a whiff of association with its previous owners, a couple whose names were synonymous with wealth, taste and privilege.

The painting, along with dozens of other first-rate artworks and hundreds of pieces of furniture, ceramics, porcelain and knickknacks on sale this week, belonged to David and Peggy Rockefeller, potent symbols of New York society and formidable collectors and philanthropists.

That provenance prompted vigourous bidding at the auction house’s Rockefeller Center headquarters on Tuesday; many of the 44 pieces went for well over the high estimate and seven set new auction highs for their artists, including for Matisse and Monet.

The Rockefeller auction, whose proceeds will go to various charities, comes on the heels of a history-making sale last year at Christie’s: Leonardo da Vinci’s Salvator Mundi for $450.3 million.

The first real test of the power of Rockefeller was Tuesday night, an auction of 19th and 20th century art.

The results were encouraging, totaling $646 million with fees - the pre-sale estimate was $490 million - and every lot sold.

Odalisque couchee aux magnolias by Matisse, depicting a voluptuous woman with her arms folded behind her head on a green chaise lounge, sold for $71.5 million. The artist’s previous auction high was $48.8 million.

Jockeying for the rights to the auction started not long after David Rockefeller, the last surviving grandson of oil baron John D Rockefeller, died last year at 101; Peggy Rockefeller died in 1996.

Christie’s defeated its rival Sotheby’s by guaranteeing the Rockefellers’ estate a minimum total price of $650 million, according to a person familiar with the terms of the deal.

That is a large gamble for an auction house since it has to cover any shortfall, although Christie’s was able to shift some of the risk to outside investors.

The Picasso was the highest-priced lot, with a pre-sale estimate of $100 million; the painting from the artist’s Rose period held pride of place in David Rockefeller’s library.

It was among a trove of artwork acquired from Gertrude Stein’s estate in 1968 by a syndicate of prominent collectors that included Rockefeller’s brother Nelson and CBS chairman William S Paley. David Rockefeller drew first pick and chose the Picasso. - New York Times/Bloomberg