John Magnier in line for €100m profit on Modigliani nude 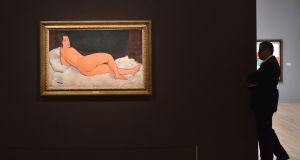 ‘Nu couché (sur le côté gauche)’ by Amedeo Modigliani during a Sotheby’s preview of the May Evening Sale of Impressionist and Modern Art, in New York. Photograph: Hector Retamal/AFP/Getty Images

When it was first exhibited in Paris in 1917, Amedeo Modigliani’s female nude Nu couché (sur le côté gauche) caused such a stir that the police were called and the gallerist was accused of outraging public decency.

On Monday it is expected to sell for more than $150 million (€126m) and make Irish stud owner John Magnier a profit of more than €100 million.

Mr Magnier, who runs the Coolmore Stud, bought the piece from Las Vegas casino magnate Steve Wynn for $26.9 million in 2003.

The pre-sale estimate is a record. Leonardo da Vinci’s Salvator Mundi, which sold for $450 million in November, had a presale estimate of $100 million.

Sotheby’s in New York are handling the sale.

Simon Shaw, the co-head of Sotheby’s impressionist and modern art department, said the increase in the painting’s value “reflects the growing love of Modigliani’s work and the significance of this piece in his oeuvre”.

He added: “It’s a masterpiece-driven market, collectors are increasingly good at differentiating the best from the rest and this is an A+ piece from an A-class artist.”

Mr Shaw said that the Italian masterpiece, which was the star of a recent Tate Modern exhibition, could easily exceed the record $170.4 million paid for a Modigliani in 2015, when another of his 22 nudes from the period was sold to the Chinese billionaire Liu Yiqian and his wife, Wang Wei.

“There is tremendous connoisseurship in China, ” said Mr Shaw, who will be the auctioneer for the Modigliani sale. “There are a number of very sophisticated investors with deep pockets and a desire to collect the best of the best. The masterpiece market is truly global and we also expect collectors from America, Europe and Russia to be among the bidders.”

At 147cm wide, it is the largest work that Modigliani painted. The majority of his reclining nudes are in museums, mostly in the US. In New York, the Guggenheim, the Museum of Modern Art (MoMa) and the Met own one each. The only one in the UK is in the Courtauld Gallery in London.

The Sotheby’s impressionist auction will end a remarkable fortnight of sales in New York, where the rival auction house Christie’s has been selling more than $1 billion of art from the estate of Peggy and David Rockefeller. Among the highlight of this week’s sale was Picasso’s 1905 Young Girl with a Flower Basket, which fetched $115 million, and Monet’s Nympheas en fleur, part of the Water Lilies series, which sold for a record $84.6 million.

While still huge sums, the prices do not come close to the record $450 million paid last year for Da Vinci’s Salvator Mundi by the Saudi Prince Badr bin Abdullah bin Mohammed Al Farhan. The piece is to go on display at the Louvre Abu Dhabi. – Guardian