‘There is only one master, Corot. We are nothing by comparison’

The world knows Corot as a great landscape artist. He kept his figure paintings secret. 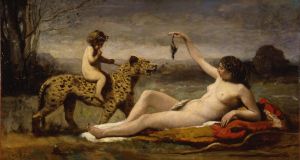 Bacchante with a Panther: a nude woman in the style of Giorgione and Titian dangles a dead bird before a leopard ridden by a naked child.

Jean-Baptiste Camille Corot (1796-1875) died soon after the Impressionists began exhibiting together, but his influence on the movement is undeniable.

Corot taught Claude Monet’s teacher, Eugène Boudin, as well as Berthe Morisot and Camille Pissarro. Morisot called Corot “papa” and adopted his misty, silver-blue-green palette. “There is only one master here, Corot,” said Monet. “We are nothing by comparison.”

Rooted in Poussin’s neo-classicism, Corot painted what he felt, like Delacroix, the romantic. He painted what he saw, like Courbet, the realist. And long before the Impressionists, Corot endeavoured to capture changing patterns of light.

Corot described his ability to reconcile the schools of 19th century painting: “Though I constantly seek to imitate reality, I don’t for one moment lose sight of the first impulse of emotion. Reality is part of art. Feeling completes it.”

In his lifetime, Corot knew huge success as a landscape painter, and most people continue to think of him that way. Alexandre Dumas, Queen Victoria, characters in Marcel Proust’s novels and latterly the British painter Lucian Freud all owned his paintings.

Yet a significant portion of Corot’s work, his painting of human figures, remained largely unknown. “This is the most experimental, most personal part of Corot’s oeuvre, says Sébastien Allard, director of the painting department at the Louvre and the commissioner of Corot, The Painter and his Models at the Musée Marmottan in Paris until July 8th.

Most of the exhibition will move on to the National Gallery of Art in Washington DC from September 9th until December 30th.

It is not clear why Corot kept his figure painting secret. Allard thinks he yearned to be esteemed as more than a landscape artist, but lacked the self-confidence to show the work in public. Another possible explanation is that Corot knew his figure paintings did not fit the criteria of the official salon and feared damaging his own reputation.

In any case, Corot hid his figure paintings in his studio, exhibiting only four of them in his lifetime. The Marmottan exhibition brings together 60. Some of these were shown for the first time in 1909, when they inspired Braque, Cézanne and Picasso.

Corot was born into a merchant family who owned a clothing shop on the corner of the rue du Bac and the quai Voltaire in Paris. His father despaired of turning young Corot into a businessman and agreed to subsidise his career as an artist. In his youth, Corot made portraits of friends and family, and went to Italy to study painting.

He painted Marietta or The Roman Odalisque in 1843.  Less than three decades separate her from Ingres’s Grande Odalisque but Marietta is infinitely more modern. She lies on a white sheet, with an arm raised over her head, staring at the viewer with insolent eroticism. One breast is exposed and the long curve of leg and thigh ends in grubbily sketched feet. Though she was painted relatively early in Corot’s career, Marietta, which belongs to the Petit Palais in Paris, is the most modern painting in the exhibition.

Corot dressed models in Greek or Italian costume and infused them with mystery and melancholy. He borrowed from art history the themes of women fetching water at fountains, reading, or playing musical instruments.

Emma Dobigny, a young woman from Montmartre who also modelled for Degas and Puvis de Chavannes, was one of Corot’s favourite models.  Dobigny talked, sang and could not remain still during sittings. “That mobility is exactly what I love about her,” said Corot. “My goal is to express life. I need a model who moves around.”

The exhibition includes three paintings of Dobigny dressed as a young Greek woman. In the first, full length canvas, she is merely an archetypal woman at a fountain. The second, from the Shelburne Museum in Vermont, brings out the character in Dobigny’s girlish, round face. In the third, Corot transforms her into the romantic character Haidée from Lord Byron’s epic poem Don Juan.

In old age, Corot began to shed the trappings of genre and costume. Once he felt he had conveyed the essence of what he wanted to say, he left the canvas unfinished.

In Interrupted Reading (1870) from the Art Institute of Chicago, a dark-haired woman wears vaguely Italian clothes. Her coral jewellery is meant to ward off the evil eye. She slumps against a table, her head resting on a folded hand, lost in melancholy reverie. The figure is portrayed with quick, energetic brush strokes. Her left hand is barely sketched, yet her face and arms are incredibly realistic. The model is believed to have been Agostina Segatori, an Italian woman who lived in Montparnasse. Segatori also modelled for Manet and would later become Van Gogh’s mistress.

Interrupted Reading is on a par with the finest contemporaneous paintings by Degas and Manet. If he could own one painting from the exhibition, the commissioner, Allard, told me it would be this one. “Because it is between two worlds, between two epochs. An ageing artist confronts the younger generation, with energy. What is more, it is magnificent.”

The signature, closing painting of the exhibition is the Louvre’s Lady in Blue. It again shows Emma Dobigny, pensive as she leans on a dark red velvet cushion. We can tell she is in Corot’s studio, because we see an easel in the left background, and two paintings on the wall behind her.

Like much of Corot’s work, Lady in Blue painted within months of his death, melds classicism and modernity. Dobigny has the bearing of a statue. The drapery of her dress is also reminiscent of Roman statuary.

Yet for the first time, Corot has painted a dress from his own era. Like Monet’s canvases of his wife in rented couture, Corot’s masterpiece is as much a portrait of the dress as it is of Dobigny.

Chance to bag a bargain online from Whyte’s