The painting, one of only five nudes ever auctioned, gave Sotheby’s its highest price yet

John Magnier the Irish businessman and horsebreeder has sold a nude portrait by Amedeo Modigliani for $157.2 million (€131.7m) at Sotheby’s. He had bought the work in 2003 at Christie’s for $26.9m. Video: Reuters 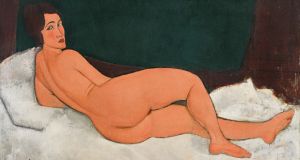 The painting had reportedly been owned by the Irish horse breeder and trainer John Magnier, who had bought the work in 2003 at Christie’s for $26.9m.

Sotheby’s auctioneer Helena Newman led a packed salesroom bidding that started at $125m but stalled at $139m, well short of the 2015 record of $170m (including fees) for another nude, Nu couche (Reclining Nude), at rival Christie’s.

The painting, one of the largest works Modigliani ever made and one of only five of his nudes ever to come up for auction, was hoped to be able to reassure the market that, in an industry increasingly concerned with contemporary painters, early 20th century masterpieces are again finding favour.

That was emphatically true for Modigliani, whose prices have for years lagged behind peers like Picasso and Monet.

After a successful $833 million sale of items from David Rockefeller’s estate last week, Nu couche was widely predicted to be the star of the New York spring auction season.

Painted in 1917, three years before Modigliani’s death at the age of 35, the picture caused a scandal when exhibited at Modigliani’s first and only solo show at Galerie Berthe Weill in Paris that year.

When a crowd formed outside the gallery to gawp at the works, the police demanded the immediate closure of the show.

On that occasion it was placed at auction by the casino mogul Steve Wynn.

It was recently included in Tate Modern’s blockbuster exhibition of the artist’s work in London, which brought together 12 of his nudes, the largest number ever assembled in Britain.

Simon Shaw, Sotheby’s worldwide co-head of the impressionist and modern art department, said it “reimagines the nude for the modern era”.

Modigliani has proved a problematic artist for top collectors. Last summer, Italian police closed down a Modigliani exhibition in Genoa after it was claimed the majority of the show was comprised of fakes.

However, last night Sotheby’s confidently put the highest estimate ever placed on a work of art at auction.

Magnier was not present at the sale.

Though he has not confirmed that he owned the work, there have been strong hints. Magnier has a three-year old colt named Modigliani. Modigliani expert Kenneth Wayne toldArtnet News the colt was so named for an association with “excellence and success”.

‘I feel ashamed to be Irish’ – David Brophy
6

God, make way for Gaia: A deity even atheists can believe in
7