Cosgrove seems drawn to workshops as spaces of industry, reflection and possibility. Out of their jumble emerges coherence 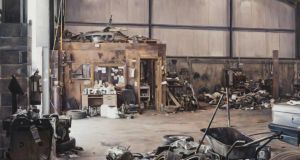 What is it?
Cabin is a 2016 oil painting by Kevin Cosgrove. It’s a representational study of a large, light-industrial workshop. Light from an open doorway to the left, and from two skylights, illuminates a fairly messy, functional interior, with a jumble of tyres and a wheelbarrow in the foreground and further heaps of car-related bits and pieces in the background. The cabin of the title is a partitioned, office-like space in the far left corner, with many notes attached to its window. There’s a familiarity to the scene, in that we’ve all seen or been in such environments. Despite the disorder it’s clearly a working space, and you can bet that its occupants – absent in our view of it – know exactly where everything is.

How was it done?
Cosgrove works in a classical way, mapping out a composition, often laying down a ground colour and building up the image with glazes of colour and, mostly, tone in a meticulous, time-consuming way. He is notably sparing with colour and pigment, never building up impasto, for example. The surface richness of his work is achieved through the precision of his technique rather than stylistic flourishes. Look closely and you will be surprised at the way he engineers complex visual effects with minimal means.

Where can I see it?
Cosgrove shows with the Mother’s Tankstation gallery, in Dublin, but Cabin is currently on view as part of a group exhibition, Industry, at the Solstice Arts Centre in Navan, Co Meath (until June 29th), curated by Sabina Mac Mahon. She has drawn together works that, as she sees it, relate on some level, whether in processes or materials or subject matter, “to industries traditionally associated with County Meath”.

Is it a typical work by the artist?
It is a comparatively large but generally typical work. Exceptionally, extending back to his degree show at NCAD in 2007 (everything sold), Cosgrove has tended to focus on workshops, usually those devoted to manual technical skills, such as engine maintenance or small-boat building. Such places are ubiquitous. It has been suggested that his paintings embody a nostalgia for a disappearing world, a pre-automated age, but in truth there’s nothing sentimental or nostalgic about his approach. He is a cool painter in the sense that his fellow artist Alex Katz meant it when he remarked that he preferred Stan Getz to Jackson Pollock. Rather, Cosgrove seems drawn to workshops as spaces of industry, reflection and possibility – literally, as Frank Stella put it, working spaces. Out of the jumble emerges coherence, something that holds true in myriad areas of human endeavour. The metaphorical richness of Cosgrove’s work is not dependent on a narrative of loss and regret for a vanished or vanishing world; rather it relates to the world continually remade, day by day.