Plus: Brian Ballard and Lisa Ballard, and Marshall McLuhan’s message is the medium 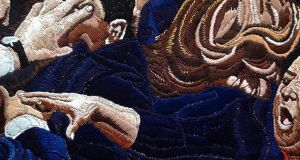 Where Does the Law Stand with Leprechauns? – Michele Horrigan

Two solo shows kick off the LAB’s new season. Sean O’Rourke paints inner city life on the rusted metal sheets used to board up derelict flats and buildings. He particularly considers youth and masculinity. Michele Horrigan’s starting point was a piece of family history: two of her aunts were, as young children, mistaken for fairy folk, triggering a visitor frenzy to their rural Limerick homeland.

Ursula Burke’s work, in such media as porcelain and embroidery, considers the way habitually classical cultural forms, be they high or popular art, persist in the face of realities that they fail to reflect. With wit and insight, she illuminates the fault-lines between the presumed and the actual. Exceptional, and all too timely.

Atherton After Ireland – A retrospective, with Sarah Hayden

Media art pioneer Kevin Atherton looks back – and forwards and sideways and around corners – fragmenting and questioning the very idea of identity, with humour, ingenuity and profundity (lightly worn). What we see spans the years 1972 to 2018. Sarah Hayden is allowed the rare privilege of quizzing the Manx man himself.

Chloe Brenan, Patrick Hough, Ermias Kifleyesus, Ciara Phillips and Lee Welch are the artists confirming that Marshall McLuhan’s proposition is more relevant than ever in the age of digital technologies and connectivity. Alissa Kleist curated on behalf of Black Church Print Studio.