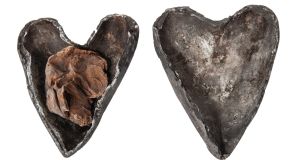 The preserved heart from the Pitt Rivers Museum, Oxford, that will be used as part of the Heartship art project by Dorothy Cross

Twenty years ago Ghost Ship, Dorothy Cross’s Nissan Art Project, set a benchmark for public art events in Ireland. Covered in green fluorescent paint, a disused light ship was moored off Dún Laoghaire for three weeks. This glowing, ethereal vessel attracted numerous visitors hoping to view it from locations along the shore. Others saw it by chance and must have wondered what exactly they were seeing. It entered into the public imagination in a way that few artworks do, long outliving the ship’s presence. In all, Cross notes, she reckons that more people imagine they saw it than actually saw it.

About three years ago, she was in conversation with Mary Hickson of Cork’s Sounds from a Safe Harbour festival. Did she have another project involving a ship, an Irish naval ship, that might work for the festival, Hickson wondered. Cross didn’t have to think twice. That sort of offer doesn’t come along often.

Some years ago she had discussed a project that involved the performance of an aria from Wagner’s Tristan and Isolde on board a ship sailing from Spike Island. She was acutely aware that people were drowning day by day in the Mediterranean and it disturbed her that we were beginning to think in statistics while many individuals were dying hopelessly and instantly forgotten. The Naval Service was active on the issue, involved in humanitarian duties on the scene. Lisa Hannigan’s recently released song (on her album At Swim), Prayer for the Dying, was on her mind, with its refrain: “Your heart, my heart. Your heart, my heart.” What she envisaged was Hannigan as a lone, isolated, slightly lost figure wandering the deck of a ship in Cork harbour.

Shark Heart Submarine, of some years ago, incorporated a shark’s heart encased in a model of a nuclear sub. Now, she thought, there should be a human heart on board the ship, a symbol of lives lost. The extraordinary sound of the glass harp, she thought, would be perfect as a soundtrack: dreamy, otherworldly. She was familiar with this instrument having worked with musician Alasdair Malloy, one of few exponents of the glass armonia. “One of the instruments he uses is actually tuned with water, which I thought was perfect.”

“I thought it would be very easy, very simple, like Ghost Ship.” While the accomplished work was elegantly simple – a ship at anchor – delivering Ghost Ship involved a marathon of protracted negotiation and logistics, with obstacles emerging every inch along the way. Such proved to be the case with Heartship.

In some respects it was surprisingly straightforward. Malloy was receptive and had a piece of music complete within six months. Hannigan was on for the challenge. The Naval Service was cautious, but very approachable and open to discussion. Then: “In my naivety I thought I could borrow a heart.” She did not presume so lightly or flippantly. It was a pretty serious undertaking. She was in touch with a medical authority. They were sympathetic to the tenor of the project. “But no. It turned out that all the laws were against it.”

Then she heard of an exhibition at the Wellcome Trust in London that included a heart, from the Pitt Rivers Museum in Oxford. Rivers had acquired it in Cork when he was there as a serving soldier in the early 1860s. It had been discovered by chance by workmen in the crypt under Christchurch. It is undated, possibly several centuries old – it had been resting on a coffin dated 1549.

The heart was enclosed in a heart-shaped case. It seemed perfect for her: a heart mysteriously preserved, and in Cork (apart from the location of the festival, Cross is herself from Montenotte). The museum was cautiously positive and, eventually, consented. “With conditions, of course. So that the heart is sealed in its metal case. It will not be on deck with Lisa; we must keep it carefully inside. But for me the point is that it is there.”

The naval patrol vessel the LE James Joyce will voyage from Haulbowline in Cork harbour and conclude at the Leeside docks where, all going well, observers can see it arriving at about 5pm on Saturday, September 14th. The heart will then be installed in the Glucksman Gallery for three days. As part of the filming of the project (overseen by Alan Gilsenan), an initial voyage was made aboard the LE William Butler Yeats.

Heartship coincides with Cross’ solo show at the Kerlin Gallery, I dreamt I dwelt (Anne’s Lane, South Anne St until October 19th, kerlingallery.com). It comprises just three works, all in stone. As she notes, “there’s nothing on the walls – usually there’s this feeling that you should have things on the wall to balance the sculpture”. So it is quite a spare installation, mostly in Carrara marble, carved by the same family business in Carrara that she has worked with for many years.

In ROOM, the outline of a shark, carved in marble, breaks surface through a floor of marble. Sharks, a species of extraordinary age, have long fascinated Cross. The form of the shark compares subtly with another work of hers on view at the moment, at Imma, as part of the group exhibition Desire: A Revision (Imma September 21st to March 22nd, €8/€5). Everest Erratic is a carving of a scale model of the Mount Everest massif, magically emerging from an untouched boulder. It recalls her Everest Shark from five or six years ago, which featured a bronze cast of the body of a blue shark; in place of its fin sits the profile of Everest. Geologically, the Himalayas are relatively recent, she notes, and, incredibly, they are predated by some species of shark.

Also in ROOM, Listen Listen consists of Greek marble carvings of pillows, with the shapes of her own ears indented into the stone. Alphabet consists of a heap of sea-smoothed stones, mostly quartz. Look closely and you’ll find, carved into 26 of them the letters of the alphabet, evoking Wittgenstein: “The limits of my language are the limits of my world.”