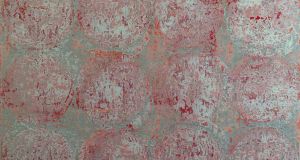 What is it? Winter Cherry Tree is a painting by Makiko Nakamura

How was it done?
Nakamura’s paintings are built up incrementally through a process of addition and subtraction. A layer of pigment is added and then partially removed, then another and another. In time, the cumulative effect recalls the appearance of a fine, densely foliated rock, or perhaps mica. Her compositions were long built on an underlying grid template, variously apparent in the finished works. It suggested the passing of time, the order of routine. More recently, the grid is much less overt and she has adopted a circular motif – phases of the sun or moon, perhaps? In any case the temporal implication is still there. She has mostly used oil paint, each piece usually dominated by a single hue – blue, red white, recurrently. Increasingly she has used Japanese pigments and metal leaf.

Where can I see it? It is included in Love Songs, Nakamura’s exhibition at the Taylor Galleries, 16 Kildare Street, Dublin 2, until October 5th (taylorgalleries.ie)

Is it a typical work by the artist? It is typical. Nakamura was born in Japan. She studied art in Kyoto and Nagoya and then trained and worked as a film editor, eventually finding her way back to painting. It is not unreasonable to suspect the influence of her experience of film on her approach to painting: the grid structure and the sense of time. At a certain point she felt, for personal reasons, that she would like to live somewhere other than Japan.

Primarily because she identified closely with the writings of Samuel Beckett – she was much struck by his plain language and his use of repetition and sameness – she decided to try Paris, and did settle there for some time, before moving on to Philadelphia and, again because of the Beckett connection, to Dublin, in 1999.  Dublin provided an environment that suited her (she became an Irish citizen in 2011 and now divides her time between Ireland and Kyoto). She once wrote that, in Japan, her paintings were exclusively white. Ireland introduced her to a broad colour palette.

Prior to her most recent paintings, which display greater surface texture, the underlying layers of her work are fragmentarily glimpsed in the smooth, sometimes glassy surface, as though preserved in amber. Because of her slow, methodical way of working, each of those captured, fragmentary marks is actually a piece of time past. While she could, presumably, tie them to specific times and memories (one of her earliest memories is of being showered with cherry blossom), it makes sense to see the work as addressing the process of remembering.

Of her title, Love Songs, she notes that she does not intend the paintings to be taken as love songs. Rather, she has in mind the intensity of feeling and the sense of longing, vitality and loss that the songs embody, while disregarding what she sees as the false promises bound up in the genre. Her paintings are considered, meditative works, reflections on our common experience of life.