Why does the heart want what it wants? Desire at Imma 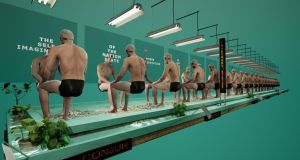 Overwhelming passion, tons of sex, or a brand new kitchen: desire can manifest in many forms. When the book, des/Ire: Designing Houses for Contemporary Ireland, came out in 2008, the cover featured all three. A moody-looking man appeared to be about to shove a strawberry tart in the face (or cleavage) of an elegant model, who had for some reason draped herself over a kitchen island. A bottle of champagne and two glasses lurked in the background.

The image came from advertising, created by McCann Erickson, for the Belmayne housing development, near Clongriffin in the north Dublin suburbs. Complaints about the advertising (that it appeared to be selling women rather than property) were upheld. The ads were also everything the apartments were not. More recent complaints about Belmayne, reported in this newspaper, include inadequate fire-stopping work and defective balconies.

The book, which I edited, came out of a conference organised by the National Sculpture Factory, at that pivotal moment when the lurid excesses of the Celtic Tiger met the stark realities of the new recession. Both a noun and a verb, “desire” is about wanting, and it can shift, according to circumstances, from wanting to survive, to wanting to wield strawberries and champagne in the company of conventionally beautiful people.

While many classify desire as an emotion, psychologists argue that it is different, arising from physical rather than mental states. Looked at that way, the strawberries-and-champagne desire may also be rooted in an instinct for survival, where status anxiety can be seen as a more modern version of the desire to be at the top of the herd. This means you both get to pass on genes, and not get picked off, as an outsider, by roving wolves.

In more recent history, desire has featured as a staple of romance, in literature and films: the endless possibilities of a central couple separated by class, convention, race or existing relationships, played out from Shakespeare’s Romeo and Juliet, to innumerable Mills and Boon paperbacks. Pity the poor purveyors of today’s romcom, as contemporary society throws up fewer and fewer barriers to consummation, and hence does away with a hell of a lot of potential plot points.

Whatever its root, desire is about a gap or a lack. Sigmund Freud, unsurprisingly, said it was all about sex (in this case a child’s desire to have sex with a parent), while Jacques Lacan argued that our deepest desire is to be at one with ourselves, which we can’t do, because we’re separated from a true communion with the self by the inadequacies of language.

Circumventing language, a new exhibition at the Irish Museum of Modern Art brings art into the conversation. From a Bronze Age gold collar, borrowed from the National Museum, to a sketch of a female figure in acrylic by Tracey Emin, to human bones and teeth overgrown by oyster nacre from Dorothy Cross, to a Nefertiti-shaped glitterball by Awol Erizku; the exhibition, Desire, is subtitled: A Revision from the 20th Century to the Digital Age.

Separated into seven sections, and with more than 100 artworks, Desire explores desire and intimacy, the desire to integrate, desire and the gaze, the politics of desire, technology and transformations of desire, and concludes with an exploration of the evolution of utopianism in desire. There is a box of Marcel Duchamp lithographs, The Bride Stripped Bare by her Bachelors, Even. Helen Chadwick’s Solar Anus, a sculpture in leather, a lightbulb and some MDF, also makes an appearance.

What is missing is obviously advertising. You don’t long for something you have, and so desire is infinitely susceptible to manipulation. One of the first to realise the potential of desire to drive consumption was Freud’s nephew, Edward Bernays. Born in Vienna in 1891, Bernays emigrated to the United States with his family at a young age, and came to champion his famous uncle’s theories, using them to create appeals to our subconscious desires. Thus, working for the American Tobacco Company, and given the challenge of getting more women to smoke, he came up with the idea of representing cigarettes as symbols of female liberation.

He also helped create the idea of what it meant to be American, in terms of consumption (good for the economy), and even eating habits: real Americans have bacon and eggs for breakfast. With today’s ever-thickening overlay of marketing, product placement, celebrity endorsement and advertising, it can be hard to unravel what our own, personal desires really are. Meanwhile, advertising that suggest a certain sofa will tell the world who you are, demonstrates our desire to know ourselves, and be known.

A quick and cursory gallop through literature and pop culture tells us that desire is hot. “The world was on fire and no one could save me but you/It’s strange what desire will make foolish people do,” sang Chris Isaak in his 1989 song, Wicked Game. “Some say the world will end in fire,/ Some say in ice,” wrote Robert Frost almost 70 years earlier. “From what I’ve tasted of desire/I hold with those who favour fire,” he added.

Whatever its origin, desire is part of our human condition: propelling us to aspire, develop, achieve, invent. In today’s over-saturated world (the wealthier parts, that is), a new problem, that of wanting to want something, has arisen. According to artist, Katherine Boucher Beug, “Desire is everything, but astoundingly few people take the time to know their desires, and fewer dare follow.” When teaching a drawing class, “If I say ‘what do you desire to draw?’, the whole mood, energy level and feeling in the class changes. Teaching desire is good teaching, but rarely taught,” she says.

Isaak, Frost and Boucher Beug don’t feature in the IMMA show, although it does feature the letters of James Joyce, in book form. And while advertising, and its manipulations of desire, is not an element within the show, the exhibition’s co-curator Yuko Hasegawa, does note the profound alterations that capitalism has made. She sees modern capitalism as dislocating desire from the realm of the internal to the external.

Building on this, the “Big Four”, as she describes Google, Amazon, Facebook and Apple, are attempting to remove the boundaries between inside and outside, so that, echoing Boucher Beug’s point, we can no longer determine whether our desires are our own. Irish artist Elaine Hoey picks up on this in a work commissioned for the exhibition. Imaginary State(s) is a live virtual reality performance, which will be enacted on a monthly basis throughout the exhibition.

Each performance, involving actors based remotely, mediated through virtual reality, explores what happens when desire becomes repressed. “It’s desire within identity,” says Hoey. “When you desire to fit in, but society imposes a norm. It causes its own sets of depression,” she says. Hoey isn’t talking about the much-derided contemporary cult of individualism, but people’s innate individuality and whether that may be threatened by being a refugee, gay, non-binary, or any of the other conditions that conflict with current norms.

As the performances, lasting for approximately 15 minutes, will only take place once a month during the exhibition, Hoey concedes that it may also occasion another recurring site for desire: wanting that which we cannot have. Overall, however, the exhibition is allusive, rather than definitive. If there is a revision, as the title suggests, it’s up to the viewer to find it.

Co-curator, IMMA’s Rachael Thomas, says that the exhibition “breathes out a space of potentiality”, but Hasegawa, who is artistic director of the Museum of Contemporary Art in Tokyo, goes a little deeper to consider the origins of desire. “Desire and ghosts,” she says, when I speak with her on the phone. “The ghost story is exploring what our desire is; going back to the unknown part of our psychological mind, into the depths. We need the darkness, the shadow, the ambiguity, the void. So for art, it is how those ghosts can be presented,” she adds, suggesting the work of Irish artist Genieve Figgis in the exhibition as an illustration of the idea.

She also tantalisingly suggests the idea of seeing our bodies as shells, occupied by those ghosts . . . So, maybe Lacan is right? Discover how desire reaches beyond words, and maybe we can be whole again.

Desire: A Revision from the 20th Century to the Digital Age runs at the Irish Museum of Modern Art from September 20th-March 22nd, 2020. Admission €8.00/€5.00 concessions. The first performance of Elaine Hoey’s Imaginary State(s) takes place on October 12th. imma.ie

On desire: what they said

“There are two tragedies in life. One is to lose your heart’s desire. The other is to gain it.” George Bernard Shaw,  Man and Superman

“Those who restrain desire do so because theirs is weak enough to be restrained.”William Blake,  The Marriage of Heaven and Hell

“Ultimately, it is the desire, not the desired, that we love.” Friedrich Nietzsche

“All human actions have one or more of these seven causes: chance, nature, compulsions, habit, reason, passion, desire.” Aristotle