Art in Focus – Strata, an exhibition by Kathy Prendergast

In upcoming exhibition in Scarborough, artist echoes one of her earliest, most celebrated works 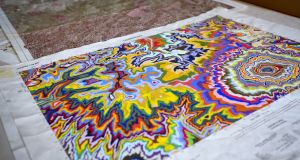 Prendergast has a substantial track record in working with pre-existing maps. Atlas, for example, consisted of 100 double-page spreads of the AA Road Atlas of Europe, with all detail blacked out apart from centres of habitation, which glow like stars against an inky night sky, imparting an awareness of the fragility of humanity’s presence. Her City Drawings (Irish Museum of Modern Art’s collection), are small, intimate, hand-drawn versions of capital city maps, transforming each into a vulnerable, organic form. Her project Lost picked out every location on a map of North America with the word “lost” in its name. The maps in Strata come from her personal collection and have been worked on intermittently over a long period of time.

Strata is at Scarborough Art Gallery, North Yorkshire, (Scarborough Art Gallery, The Crescent, Scarborough, September 14th-January 5th scarboroughmuseumstrust.com). Its opening coincides with the Yorkshire Fossil Festival (September 13th-15th). The show, curated by the arts and science organisation Invisible Dust, also includes teaching maps created by women geography students from Bedford College, now Royal Holloway, University of London. It marks the 250th anniversary of the birth of William ‘Strata’ Smith, whose 1815 geological map of England, Scotland and Wales, often referred to as the map that changed the world, visualised the terrain in terms of its geological layers.

It is typical, though there is no cohesive theme, no neat conceptual package: it’s more as if we are gaining an insight into the artist’s working process.

While not exactly a recluse, Prendergast has always managed to maintain a rock solid reputation entirely on her own terms, and those terms include not a great deal of visibility. After graduating from the National College of Art and Design in 1983, she moved to London to complete her master’s and has more or less been based there since, working consistently though apparently quite content to keep a low profile. That did not stop her winning the significant Best Young Artist award at the Venice Biennale in 1995, mind you.

Maps and cartography have been recurrent in her art from early on. Her extraordinary NCAD degree show created nothing less than a benchmark of contemporary Irish art. It consisted of a series of handmade maps. They were cartographic renderings of a woman’s body as landscape, and each was couched in an aspect of the language of domination, control and exploitation that underlies a great deal of cartographic enterprise, and of patriarchal attitudes to women.

Unsurprisingly, Strata taps into several of these concerns. For three years from 2000, Prendergast was artist-in-residence at the Geography Department of Bedford College which was, from its foundation in 1849, the first higher education institution for women in the UK. Women students could engage in geological and geographical field work closed to them elsewhere. At some point following her residency, it seems that Bedford’s hand-coloured topographical and geological teaching maps were being digitised and Prendergast was offered access to the original maps, some of which will be on view in Strata.