A meeting of minds between the abstract and the representational

The two styles are suspicious of each other, but this exhibition gets them talking 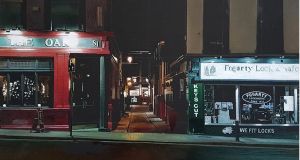 Penumbra inventively matches a representational, even quasi-photographic realist painter with an abstract painter. Will they have anything to say to each other, you might wonder. Often there’s a division between the two approaches, sometimes but only occasionally a deep-rooted antipathy, more often a genuine gap in comprehension. A representational artist might regard abstraction with blank puzzlement, as though its practitioners exist in an alternate universe, to all intents and purposes like our own, apart from this one incomprehensible anomaly.

Or disapproval might come across as more like a religious prohibition, or an expression of cultural disapproval, as though abstraction is an ideological construction, cunningly designed to excuse art from its social obligations. Popularly, abstraction can be seen as any representation that departs from conventional appearances, so that it’s abstracted, even if it is not, as it’s often put, fully abstract.

Of the two painters in Penumbra, Megan Burns more obviously fits the abstract bill. She makes elegantly poised compositions of hard-edged, interlocking geometric forms. The format is non-rectangular and non-symmetrical, but straight-edged and regular. It usually echoes or is otherwise related to the spatial play within the compositions, of which there’s a lot: spaces advance or recede or overlap. The palette is generous, but also judicious, with a certain classical sobriety. And tonal range is important, with considerable contrasts, for example, but again judiciously employed and even-tempered.

We can never settle on an interpretation, continually directed elsewhere as yet another possibility suggests itself

Colour and tone carry their own associations, subject to our interpretation: doesn’t that oblong of blue suggest the sky, that rectangle a window or a doorway, that angled block of grey the side of a building receding towards the horizon? Surely that might be a set of steps leading somewhere? In fact the spatial, architectonic associations are inescapable.

But it’s important to say that Burns never ties herself to an image as such. A particular passage in a painting may recall a section of a piazza in a de Chirico, or indeed an actual piazza in a city of your choice, opening a pathway for our eyes and minds to explore and interpret the arrangement of forms and colours and tones in terms of mass, space, light and shade. But we can never settle on an interpretation. Instead, we’re continually directed elsewhere as yet another possibility suggests itself. This process of engagement and deferral is by no means uncommon in representational as well as abstract painting, and in fact any form of image-making.

Burns, who also features in the Hennessy Craig Award shortlist show at the RHA at the moment, does it very well. Her co-exhibitor, Francis Matthews, a past recipient of the Hennessy Craig Scholarship as it then was, addresses a specific area of subject matter: some Dublin city centre streets by night, when they are emptied of traffic and pedestrians, though electric light creates islands of illumination (he has, in the past, included traffic in paintings). Lately he has apparently ventured further afield, to Venice, that labyrinth of alleyways and canals. The quietness together with the lights, colours and reflections recall the dissipated liveliness of the evening, the calm after the storm.

In a sense Matthews, an architecture graduate before he turned to painting, sets out to paint an invisible city. It’s there in the darkness, with pockets of it lent substance by the fall of light or, to turn the process around, and as the artist put it himself: “Brightness fleetingly becomes a solid thing.”

It is risky for a painter to invoke Vermeer, because to do so is setting the bar pretty high

Light is crucial. He has described how he experienced a moment of realisation at a National Gallery of Ireland exhibition featuring Vermeer and his contemporaries. The increasing detail and precision of Dutch painting reached a curious turning point with Vermeer, he realised. Vermeer did not pursue greater levels of linear or granular precision in his paintings, instead aiming for optical accuracy, almost certainly employing a form of camera obscura, giving his images a photographic quality. Look closely, and the impression of detail often dissolves into passages of virtually abstract marks. But step back and the overall image looks exactly right, because he paints the way we see things.

Matthews does exactly that, too, quite dramatically so in his Camden Street Upper, for example. He  doesn’t set out with a schematic plan of facades and streets and laneways and then figure out how they would appear under artificial light during the hours of darkness. We are persuaded that the depths, blocks and facades are there, in his compositions, because the islands of visibility created by the play of light imply that they are there. As he said, the solidity of the light creates the spaces and the masses.

It is risky for a painter to invoke Vermeer, because to do so is setting the bar pretty high. But Matthews is a very accomplished painter, and not just technically: his judgment is very sound.

Given all this, a certain equivalence between the two bodies of work begins to emerge. Both artists deal with how perception works, how we engage with and interpret the visual clues we are offered. Beyond that, the work of each has its own emotional tone and texture. Presumably that has to do with personality and sensibility, rather than intention or calculation, but, in the end, abstraction and representation turn out to have quite a lot to say to each other.

The poisonous myth: Democratic Germany’s ‘stab in the back’ legend
9