Irish art collective Subset are calling for changes to street art regulations to allow for the production of large format artwork. Video: Subset 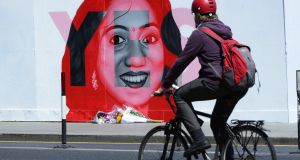 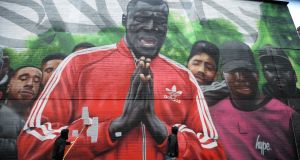 The group behind some of the most recognisable street art in Dublin have released a video documentary calling on the city council to radically change its regulations on street art.

The new video forms part of the Subset artistic collective’s Grey Area Project, responding to prohibitory planning laws. In the face of council demands to paint over their work, they decided to go on a blitz, covering the capital in murals quicker than they could be asked to take them down. Around 60 projects have been realised, with walls around the city coming alive with pieces by artists ADW, Aches, Sinead Bailey Kelly, James Kirwan, and others.

At the Offset creative conference in Dublin in March, a member of Subset artistic collective appeared on stage wearing a mask in front of a large grey backdrop and spoke to the audience about difficulties with Dublin City Council. It was a remarkably punk rock and downbeat moment that brought the politics of local government down the Liffey into the Grand Canal Dock venue.

That project has now been visualised in the short documentary, as well as an exhibition at Point Square in Dublin’s docklands, running until June 28th.

There is also a call to action, with nearly 4,000 people having already signed a Subset petition on change.org calling for the “licensing of public spaces for the delivery of large scale public artworks”.

Subset has worked with the architects GoKu to develop a draft public art framework, through which such licensing could be achieved.

The framework reflects the stated goals of government arts policy in the Creative Ireland Programme and the Dublin City Development Plan. While Dublin City Council does engage with artists and art collectives, planning permission is still often required to paint a mural outdoors, even if the artist has permission from the property owner. This arduous and expensive process sometimes equates murals with erecting a structure.

“The application of such processes is contrary to the essence of large scale public artworks, murals and street artists who create them,” Subset writes in the draft framework document.

“By its nature, street art is spontaneous, reactive, reflective, contemporary and largely transient.”

There is a certain reversal of roles and irony in street artists seeking regulation and clarity, and the regulator responding in an ad hoc manner.

The documentary film by Trevor Whelan and Rua Meegan is an excellent portrayal of cloak and dagger street art realised large.

“Artists have always known barriers in Dublin,” the voiceover says, “Many have struggled to stay afloat in this black pool… Creativity still struggles in Dublin today. The artists who use our streets as a canvas and create are for all to see, no admission fee, no social barriers, they too are being censored.”

The power of street art has become even more pronounced in Dublin recently, with the ongoing discussion over censorship and the nature of political art relating to Maser’s Repeal mural at Project Arts Centre, which after being painted over (twice), was repainted on the wall of Amnesty Ireland’s office in Temple Bar.

A mural of Savita Hallapanavar by the artist Aches on hoarding outside the George Bernard Shaw pub, in South Richmond Street, a popular spot for graffiti jams and large format artwork, became a touchstone in the immediate aftermath of the referendum vote, with people gathering to lay flowers and notes, in a massive outpouring that became one of the most visually recognisable facets of the referendum.

Grey Area Project has also tapped into a broader discontent in the capital around homogenisation, gentrification, and a sense that tourists are being prioritised over those living in the city.

Street artists are particularly concerned about the upcoming closure of Tivoli Theatre / District 8, which has an outdoor space central to Dublin’s high-quality street art scene.

Subset’s latest piece of artwork is in collaboration with Inner City Helping Homeless, and prints are also being sold with donations going to the organisation.

subset.ie . See change.org for the petition