The Irish take over the 16th Venice Architecture Biennale 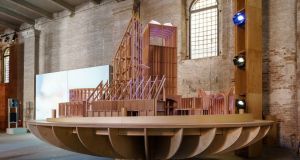 Exquisitely crafted timber models and installations, such as those by London-based Alison Brooks and Dublin-born Niall McLaughlin (an example pictured above), are among the most memorable at this year's Biennale.

Ireland made its debut at the Venice Architecture Biennale in 2000, with a national pavilion consisting of bales of peat briquettes, corbelled like the Gallarus Oratory in Co Kerry to form two interlinked chambers.

The piece, N3, was designed by brilliantly wacky architect Tom de Paor and located so remotely from the main exhibition sites that only the cognoscenti actually saw it before it got frazzled by the Venetian sun.

Less than 20 years later, the Irish have taken over the 16th architecture biennale. Its curators are the formidable Yvonne Farrell and Shelley McNamara, cofounders of multi-garlanded Grafton Architects.

They set “Freespace” as its theme and managed to impose their generous notion of architecture giving something back to the public on dozens of countries and hundreds of leading architects from all over the world.

Talking last October about the immense challenge of filling spaces as long as O’Connell Street in Dublin, if laid end to end, they set about showing Ireland’s ability to stage an exhibition on a global scale. “We’re not wearing green jerseys, but we’ll be very proud to make something that is world-class,” they said. What they have pulled together is an unqualified triumph in every way, making this the best biennale I’ve ever attended.

Their treatment of the Corderie, in the Arsenale di Venezia, where rope was made for the rigging of Venice’s ancient fleet, is spectacular. Not only have long-blacked-out windows been opened up to let in the light, but the entire central area forms an uninterrupted promenade so that, for the first time in years, you can see from one end to the other after entering through a curtain made (very aptly) of dangling ropes.

After going through the bare ante-room, with projected images of naval ships under construction, visitors process along the 300m walkway, flanked by an astonishing range of exhibits, all relating to the “Freespace” theme in one way or another. Exquisitely crafted timber models and installations, such as those by London-based Alison Brooks and Dublin-born Niall McLaughlin, are among the most memorable.

You could easily spend an hour playing with, and being dazzled by, the complex installation devised by McLaughlin and his team of architects to show how sunlight moves through models of five of their buildings, including the beautiful chapel at Rippon Theological College near Oxford and the International Rugby Experience tower planned for O’Connell Street, in Limerick, all set on a moving circular table; it is mesmerising.

O’Donnell + Tuomey, no strangers to the Venice Biennale, are further along, with a starkly white staircase that fuses the entirely different scales of a rambling angular house in Roundstone, Co Galway, and a proposed opera house in Shanghai, while deBlacam & Meagher feature a Venetian-inspired triptych illustrating their central social space in Cork Institute of Technology, a large circle enclosed by millions of bricks.

Also in the Corderie is Eduardo Souto de Moura’s stunning transformation of a Portuguese convent dating from the 12th century into a 32-room pousada, with a restaurant in the former cowshed and a bar where there used to be olive presses. “The only way to preserve heritage is to live with it and use it”, as he said himself. The veteran won the biennale’s Golden Lion award for the best participant.

The Golden Lion for the best national pavilion went to Switzerland for House Tour, which was designed to show the banality of unfurnished rental properties – all-white walls and ubiquitous timber floors – by playing with scale, like Alice’s Adventures in Wonderland. Ireland’s Free Market pavilion, illustrating the challenges faced by traditional market towns, was among the top seven “must-sees” by the AJ (Architects’ Journal).

Not surprisingly, its official opening was thronged with architects from Ireland, a few hundred of whom had travelled to Venice for the opening. And it was wonderful to see so many Irish towns, from Athenry to Templemore, showcased so well in Venice for an international audience, not least because the problems of decline and depopulation they have experienced are pretty well universal at this stage.

Venice itself is a basket case. It is thronged daily by up to 80,000 day-trippers, while its population has fallen below 60,000 – compared with 250,000 in Casanova’s day – as the city is surrendered to the horrors of mass tourism. The vaporetti (water buses) are so crowded and the streets so full of tourist trinket shops that Venetians are now in revolt, demanding serious restrictions on this army of occupation.

The Czech and Slovak pavilion in Giardini has been turned over to an agitprop exhibition by artist Katerina Šedá, focusing on the historic Czech town of Cesky Krumlov, which attracts a million tourists every year. She’s actually offering families the opportunity to take up “full-time jobs living a normal life” in the depopulated town centre, engaging in everyday activities to show that it may still be possible to do so.

Israel has an exhibition focusing on how often bitter struggles between competing religions in the Holy Land are “mediated”, but we didn’t go in. After the massacre of more than 120 Palestinians protesting at the fortified fence around Gaza in recent weeks, the pavilion is being guarded by at least 10 armed riot police, and this is rather off-putting. Hopefully, Israel rather than Italy is paying for all of the security.

Britain’s neoclassical pavilion is stripped bare for Island, which could be classed as a meditation on Brexit. It was funded by the British Council and embraces themes of “abandonment and reconstruction, sanctuary and isolation, colonialism, climate change and our current political situation”. It is festooned with scaffolding, with an external staircase to a panoramic platform at roof level above the Giardini’s tree canopy.

Railway buffs such as me were closer to heaven in the Russian pavilion, which has been turned into a train station for this biennale. A captivating audiovisual presentation traces the development of stations across the vast country, including many in the “Stalinist classical” style, while other elements focus on future high-speed rail plans and the basement is a left-luggage room with lockers containing railway artefacts.

In the Giardini’s Central Pavilion, another exhibition, Close Encounter, occupies a front-of-house position, featuring installations by 16 Irish architectural practices in response to the works of other architects from all five continents, chosen by Farrell and McNamara. However, it is a bit cluttered with thrown shapes and slightly confusing, too, as the pieces are only identified in long captions on the back wall.

Other delights include French architect Odile Decq’s curved mirrors and sinuous benches inspired by the cafe she inserted in the Opera Garnier in Paris, Belfast-based Hall McKnight’s new public space in Copenhagen dotted with 120 cherry trees, and a continuous loop of “Freespace films” ranging from Kevin Roche talking about his Ford Foundation in New York to the dramatic break-up of glaciers as big as Lower Manhattan.

There is much, much more to see and experience at this biennale, for which the Department of Culture, Heritage and the Gaeltacht gets top billing among the donors. It even includes a Cruising Pavilion on Giudecca Island, dedicated to how gay guys used to meet others for casual sex in the years before the Grindr app effectively took over from "cruising" in public parks.

Angela Rolfe, a former senior architect with the Office of Public Works, was quite emotional about the brilliance of the two female curators and how they had tamed the egos of so many male “starchitects” by getting them to stick to the Freespace manifesto. As Shelley McNamara herself said, “you can’t do architecture if generosity isn’t at the core of your projects”. Hats off to the two Irish Queens of Venice for their superb show.