The painter is barely known in her adoptive country. A Paris show hopes to change that 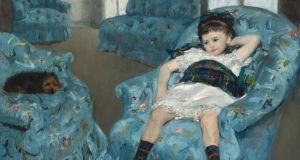 In her native United States Mary Cassatt is a well-known and much-loved painter. But in France, where Cassatt spent more than three-quarters of her long life and chose to be buried, she was all but forgotten.

Cassatt was one of only three women impressionist painters, and the only American to fully integrate the most important artistic movement of the 19th century. “She was successful in her lifetime. She sold enough to buy herself a chateau and fine clothes,” the art historian Nancy Mowll Mathews says.

For her services to art Cassatt was awarded the Légion d’honneur in 1904. Yet “French people have known less and less about her”, Mathews says. “There weren’t enough of her works left in France to be part of major impressionist exhibitions. The definition of who was an impressionist narrowed. She was sort of shunted to the side.”

Cassatt had three strikes against her: her gender, her foreignness and her reputation as the painter of motherhood

Cassatt had three strikes against her: her gender, her foreignness and her reputation as the painter of motherhood.

The Musée Jacquemart-André, in Paris, has sought to right that injustice, recruiting Mathews, the world expert on Cassatt, to cocurate the exhibition Mary Cassatt: An American Impressionist in Paris, which continues until July 23rd.

Cassatt was born in Pittsburgh in 1844, a descendent of French Huguenots called Cossart who emigrated in the 17th century. She spent five childhood years in Paris while her affluent family consulted doctors for her brother Robbie. When he died of bone cancer, in 1855, the Cassatts returned to Pennsylvania.

From childhood Mary Cassatt was determined to become a painter. Her father, Robert, a banker, said he would rather see her dead. Mathews believes he wanted to protect her from “the equivalent of trolls, who harassed and followed public figures, especially women.” To avoid notoriety Cassatt signed early paintings with her initials or middle name, Stevenson.

Cassatt returned to Paris in the 1860s, and again after what she called her “American exile” during the 1870 Franco-Prussian War. She exhibited four times in the official Salon, the annual exhibition of the Académie Royale de Peinture et de Sculpture, and travelled across the Continent, copying Correggio, Velázquez and Rubens. “Painting cannot be taught,” she said. “One doesn’t need lessons. Museums are sufficient.”

Edgar Degas saw one of Cassatt’s paintings in the 1874 Salon. “This is someone who feels the way I do,” he said. Degas and Cassatt met three years later, and became lifelong friends.

“Degas’s mother was American. Both his brothers lived in New Orleans and married American women,” Mathews says. “Degas and Cassatt even talked about making a trip to America together. They had a lot in common.”

Cassatt eagerly accepted Degas’s invitation to abandon the Salon and exhibit with the impressionists. “At last, I could work with total independence, without worrying about the opinion of a jury,” she wrote. “I started living.”

Cassatt’s mother, father and sister moved to France in 1877. They were contemptuous of the American community in Paris but loved mixing with Degas, Cassatt’s friend Berthe Morisot and other impressionists. The art historian Annie Cohen-Solal compares Cassatt to James Whistler and John Singer Sargent, “Europeanised characters from the cosmopolitan American ‘aristocracy’ described in the novels of Henry James”.

Like other impressionists, Cassatt painted her own family in everyday settings. Her brother Alexander was president of the Pennsylvania Railroad, then the most valuable company on the American stock exchange. Cassatt’s portrait of Alexander reading a newspaper while his son Robert Kelso perched on the armchair could be mistaken for a Degas. Both painters excelled at conveying “the fragmented light of Parisian apartments”, a contemporary critic wrote.

With her passion for couture hats and dresses, Cassatt’s sister made an ideal sitter. In The Cup of Tea Lydia sits in a pink dress and hat, daintily holding a tea cup with a gloved hand. She would die of kidney disease the following year, at age 45.

In the Loge shows a woman in an opera box, also a popular theme among impressionists. The operagoer, probably Lydia Cassatt again, wears day clothes, indicating a matinee performance. We watch her watching the stage as a man in the background also studies her, through opera glasses.

Feminists have regarded Cassatt with ambivalence. On the one hand she is a rare example from the past of a woman who succeeded in a male-dominated field. On the other hand her portrayal of women in society could be interpreted as frivolous, while motherhood, the theme with which she is most associated, was long regarded by feminists as tantamount to enslavement.

In 1894 Cassatt purchased Château de Beaufresne, in the Oise region, north of Paris. The property included a pond and mill house, which she used as a printmaker’s studio. Like Degas, but unlike other impressionists, Cassatt rarely painted outdoors. Her paintings of ducks and women and children boating on the pond at Beaufresne are an exception. Summer, which shows the effect of sunlight on water, is one of Cassatt’s most truly impressionistic paintings.

Mathews says Little Girl in a Blue Armchair exemplifies different French and US attitudes towards Cassatt. The French love the painting because it looks like a Renoir, and because Degas worked on the background, to give it depth. The main interest of the French in Cassatt is her association with impressionism. That matters less to Americans.

In 1890 an exhibition of Japanese woodblock prints known as ukiyo-e, or “pictures of the floating world”, fanned the craze for Japonism among French artists. Cassatt set herself the challenge of achieving the same effect, but with western techniques. Her dry-point and aquatint print of La Toilette shows a woman from the back, washing in a basin before a mirror. Her dressing gown has fallen to the waist. The subject matter, absence of perspective, and delicate colouring are worthy of a print by the Japanese master Kitagawa Utamaro.

On seeing La Toilette, Degas, who was notoriously misogynistic, remarked, “I don’t believe a woman could draw that well. Did you really do this?”

Cassatt is not known to have had any romantic attachments. She never had children, yet she was unparalleled at capturing the natural tenderness of mothers with infants. An exhibition organised by the dealer Paul Durand-Ruel in 1893 established her as the master of the “modern Madonna”.

In Baby on Mother’s Arm the faces of mother and infant emerge from a swirl of unfinished lines, “present in the same absence, suspended in an instinctive, almost animal fusion”, Curie says.

Although her modern Madonnas were extremely popular in her lifetime, they eventually led to the stereotyping of Cassatt. “The problem is how to talk about her work and give it the respect it deserves,” Mathews says. “She said the male world was totally covered by male artists, and that female artists needed to embrace the eternal, grand theme of mother and child.”

If Cassatt were to live today she would be called an influencer. Her fondest dream was for the United States to build art collections comparable to those in Europe. To that end she guided the purchases of rich American collectors, on condition that they promise to leave their treasures to museums. Louisine Waldron Elder was still a teenager when Cassatt persuaded her to buy a pastel by Degas. At Cassatt’s urging she then borrowed pocket money from her sisters to purchase works by Monet and Pissarro. She and her husband, the sugar millionaire Henry Havemeyer, left their fabulous collection to the Metropolitan Museum.

Cassatt was forced to flee Beaufresne for Grasse, in southern France, in 1914, because her home was close to front lines in the first World War. She underwent several failed operations for cataracts, and would never paint again. She returned to Paris in 1917 for the funeral of her friend Degas.

On the opening day of the Paris retrospective Mathews imagined Cassatt “up there, looking down, just being very happy, saying, ‘I’m getting the recognition I hoped for.’ ”

Mary Cassatt: An American Impressionist in Paris is at the Musée Jacquemart-André, in Paris, until July 23rd