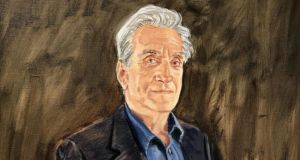 Robert Pinsky, painted by Mick O’Dea in 2015: the artist is known for the conversational informality of his approach

What is it? A portrait of the American poet Robert Pinsky painted by Mick O’Dea during Kilkenny Arts Festival in 2015.

How was it done? Over three years O’Dea took on an unusual challenge, agreeing to be the festival’s artist in residence. It was a time when, under the artistic direction of Eugene Downes, the festival stepped away from being all things for everyone and reconnected with its musical roots. But one nonmusical strand continued to flourish: the literary, embracing fiction, poetry, commentary and history. O’Dea’s brief was to make portraits of many of the musical and literary participants when they visited Kilkenny, and he amassed quite an inventory of portraits of cultural figures, both Irish and international. Among the subjects are the novelists Yiyun Li and Colm Tóibín, the poets Paula Meehan and Paul Muldoon, the musicians Martin Hayes and Dennis Cahill, Maighread and Tríona Ní Dhomhnaill and Iarla Ó Lionáird, the actors Marie Mullen, Stephen Rea and Simon Callow, the archivist and writer Catriona Crowe and the psychiatrist Ivor Browne.

Where can I see it? The painting is included in Kilkenny Festival Portraits, 2015-17, at the Kevin Kavanagh Gallery, in Dublin, until June 30th.

Is it a typical work by the artist? Yes and no. On the one hand O’Dea is a portrait painter of long standing, known for what might be termed the conversational informality of his approach, a relaxed, candid engagement with the sitter. On the other, he does not habitually work, as he did in Kilkenny, in a theatre-like setting in the presence of sizeable public audience and, more often than not, while maintaining a lively conversational commentary involving audience, artist and sitter – performance art in the high-wire sense of the term.

Born in Ennis, Co Clare, O’Dea became fascinated by the process of drawing early on, and that fascination has never diminished. Some years ago, working to complete an MFA in Barcelona, he looked at changing the direction of his work, experimenting with a more sculptural, even conceptual approach. It was, to some degree, a diversion. He remains at heart committed to drawing and painting in a more traditional sense, making representational work in the areas of portraiture, interiors and landscape.

Drawing is the armature on which his paintings are built, and the overall effect is usually vivid, direct and lively. He did, ambitiously and very effectively, make a series of large paintings based on documentation from the Easter Rising and the War of Independence (including some fine sculptural pieces), but for the most part he tends to prefer working with a subject matter that is directly in front of him, be that a person, place or thing.

He brings formidable energy and determination to all of his projects. Even so, the multiple demands of the Kilkenny Festival residencies were exceptional.