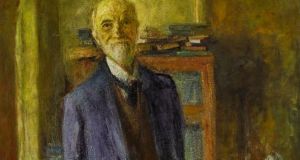 Self Portrait, New York, has been plausibly described as John Butler Yeats’s masterpiece. It was acquired at Sotheby’s, London, in an auction of Yeats family material on September 27th, 2017, by a private collector and, with other items, passed on to the Niland Collection in Sligo. These additions enhance the most significant public collection centred on Jack B Yeats and the wider Yeats family in Ireland

apart from the National Gallery of Ireland.

The majority of the extant work by Yeats (1839-1922) is in the form of small, impromptu portrait sketches: quick, accurate and astute in their psychological grasp of the sitters. He did work as a professional portrait painter, however, and completed many fine, full-scale paintings, one of the most celebrated being his portrait of John O’Leary.

This self-portrait, dating from his years in New York toward the end of his life, is relatively large and agreeably informal. It is more post-impressionist than expressionist in feel; French painting decisively influenced his artistic development.

It is included in Portrait of a Family at The Model, Sligo (themodel.ie, until October 28th). The exhibition provides an intimate portrait of the extraordinary Yeats family (including John’s wife, Susan; her parents, the Pollexfens; and the four exceptionally creative children, William, Susan, Elizabeth and Jack; via the paintings and drawings of John and other artists. It features other works newly acquired from the Sotheby’s sale.

Not quite, although, as a late work, it exemplifies the gradual transition from the conventional realism of his academic training at Heatherley’s art school in London, to his freer engagement with the possibilities opened up by contemporary European developments. John, a famously restless spirit, was the son of a Co Down Church of Ireland rector and married Susan Pollexfen. He was a prize-winning student at Trinity and went on to become a barrister. Though intellectually accomplished, he did not settle into the legal world – often sketching in court, for example – and, to the alarm of his wife’s family, decided to abandon law and become an artist. Portraiture suited his lively temperament, his inveterate interest in people and his appetite for conversation. His subjects included many of the leading figures in Irish cultural life at the time. Technically he was more than capable, though in a significant proportion of his work he can come across as an underachiever, unsure of how to resolve a painting. Although given to moments of self-doubt, rather then feeling overawed by the respective achievements of his two sons, he genuinely felt that his talents were more than the equal of theirs, in both artistic and literary spheres. He was 68 when he arrived in New York, having decided to accompany his daughter Lily at the last moment, but he liked it so much he stayed on when she returned home. Financially impractical and impulsive, he would hardly have survived there without help, especially the generosity of the great Irish-American lawyer and collector John Quinn.

Covid-19 and dementia: ‘My father studies me, as if trying to put together a difficult jigsaw’
7