Wild at art: The edgy arts residencies of Lay of the Land 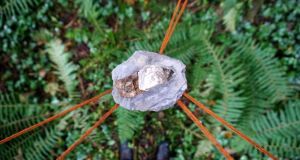 “Exploring the interconnection of art, nature and people can be transformative,” says Kari Cahill, “and not just for artists but for local communities too.”

To prove the theory she and the artist Hazel McCague set up an initiative titled Lay of the Land to create art residencies which offer opportunities to create work from extended interaction with remote and liminal areas of Ireland. “Our aim is to drive the experience of art outwards into the wild landscape of this island.”

So far this has led to events in the wilds of Brow Head on the Mizen Peninsula in west Cork; on the shores of Glanmore Lake in Co Kerry; in the Knockomagh Wood nature reserve by Lough Hyne in west Cork; and in an off-grid sheep-crofters cottage in the deserted famine village of Port near Glencolmcille, Co Donegal.

For each gathering artists were invited to immersive themselves for a few weeks or days in an area, and while there to create site-responsive artwork on their own or in collaboration with others. Some of their work is exhibited in situ and will only ever be seen by those who make the pilgrimage out to the remote site, others spark the production of a screen-print, a recording or a photograph that can be shared with others.

When I ask Cahill what precisely “site-responsive” art entails, she tells me about the first day of their three-week residency on Brow Head in 2016, when the artists were all gathered on the spectacular headland amidst a dense fog that covered the entire area.

“There was nothing to see. We hunkered in the back of a van, drinking tea, when suddenly an unearthly sound began to rise up from the cliffs. There couldn’t have been anybody there, but the sound continued to sing eerily, until suddenly we realised it was the wind blowing through field gates – singing the song of each gate.

“Everyone was suddenly enlivened, and it led to the development of a collaborate piece called Land Flutes, in which we gathered old pipes and gates from the dump and ditches and we drilled holes in them and carried them around the mountain until we found the place that made the best sound.”

The artists then dug them into the ground as giant flutes that played the specific sound of the wind on that day, at that time, in that place, for visitors who happened to pass by.

“That’s site-specific art,” says Cahill. “The idea was inspired by the land, the materials came from the area, and it captured our core mission of getting out into nature and really sensing it.”

The pieces also encapsulates Lay of the Land’s commitment to engaging local residents in art in a way that is comfortable to them – whether by rooting around their yards for old pipes, chatting over cups of tea or full artistic collaboration.

“We feel strongly about not turning up somewhere and telling people what their culture is, and what should be important to them. We want to meet them on their turf, on their terms.”

Anything that might seem elitist or have a whiff of unintelligible “art-speak” is avoided. “We want to make arts practise more understandable, and also more visible, so that people begin to appreciate the role of artists in society.”

They are frequently surprised by the warmth of the welcome they receive.

“People have shared their boatyard, pottery shed, welding shop, painting studio, carpentry workshop and catering kitchen with us. It seems they appreciate what we are doing, and are curious to see what artists actually do all day.”

A bold example of their determination to return to more environmentally-rooted, natural processes is represented by the piece Sea Cyanotype created on Brow Head this summer.

It involved the artists soaking 20m of fabric in a bath of ferric ammonium citrate and potassium ferricyanide at 3am so that the photo-sensitive mixture would not be exposed to sunlight and start oxidising or “developing”. They left it to dry in a tent overnight before submitting it to a four -minute exposure of coastal light next morning, and then soaked it in the ocean to stall the reaction and fix the colours.

“The oxidation process is similar to rusting, which was immediately familiar to locals. The next step was the craziest: it took 15 of us an entire day to rig the material to the cliff face so that it hung straight down into the ocean. The weather was tumultuous and windy, with waves exploding up out of chasms in the rock. It was madness, a bit dangerous, but exhilarating.”

By 8pm their work was complete, but next morning they woke to find something unexpected and magical had occurred. The salt water had further oxidised the cyanotype, and it turned from its blue colour to a rich auburn orange where the tideline had been lapping at it overnight. It was a visceral representation of the rising tide, and it added an extra nuance to the original pattern that had been created using a masking layer of sea spaghetti. Again the work could not have been created anywhere except in that location on that day.

For their latest project Lay of the Land will be heading to the island of Árainn Mhór off Co Donegal next month to immerse itself for two weeks in the culture and folklore of the area for a project titled Calafort (the Irish for harbour).

The artists will build a mobile exhibition lab which they will bring around the island, from craggy coves to boggy depths, gathering old stories and craft techniques which will be woven into artworks using local plant material.

The aim of Calafort is to honour the natural resources abundant in the landscape and the adaptability of islanders. The residency will culminate with a gathering over the weekend September 13th-15th in which the public is invited to share its knowledge and experiences of Árainn Mhór’s natural and social heritage with artists at the mobile lab.

People will be encouraged to forage for specific plants that can be used to make inks and dyes, and these pigments will then be used to record the knowledge and memories received.

Each contribution will be marked by the gesture of tying a knot in a large rope, thereby creating a collective art piece that signifies shared experiences.

After that Lay of the Land will embark on a period of art-themed fundraising dinners in Dublin so that it can gather finances for future gatherings in which art can be produced and exhibited in the wild over extended periods.

So far funding from the Arts Council has enabled it pay the participating artists for their time on the residency, as well as covering their materials and accommodation costs. This, it believes, is a vital gesture towards honouring the artists and ensuring the sustainability of their arts practise.

Each project has so far created enormous logistical and meteorological challenges, as can be expected in such remote and wind-ravaged locations. They succeed largely because of the kindness of local communities and the commitment of their crew, many of whom have honed their skills on festival installations.

However, Cahill insists that “the toil and repeated soakings are worth it for the intensity of the highs that come with creating art at the edge of wildness, at the limits of our endurance…If you love the outdoors and believe in art as a portal to the profound, why wouldn’t you at least try?”

For a full taste of their past works, including Brenda Kearney’s sublime ceramic forms cast in an underground pit, Millie Egan’s tactile reflections on lichens and corrugated sheeting, and Karin Hanusch’s installations of absence check out layoftheland.ie