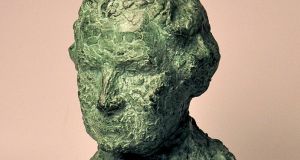 Sybil le Brocquy, by Melanie le Brocquy, is a head-and-shoulders portrait bust of the artist’s mother.

The head was modelled in clay. Le Brocquy’s slow, considered way of working is evident in the textural quality of the surface, built up with myriad incremental additions. She does not smooth the clay the better to imitate skin, but rather employs it to express the subject’s material presence. Eschewing fine detail in the conventional sense, le Brocquy nonetheless conveys great precision of observation in her work.

The portrait was presented to the Hugh Lane Gallery by the Sybil le Brocquy memorial committee in 1977 and is in the gallery’s permanent collection, Parnell Squar, Dublin (which does not mean that it is always on public display).

However, from September 6th, the foyer of the RHA Gallagher Gallery will feature Familiar Gestures, a small exhibition of le Brocquy’s work (until November 10th). This will include six of her sculptures, all on loan from private collections. The RHA hosted the artist’s retrospective exhibition in 1999.

It is typical. Le Brocquy’s work is predominantly small in scale and almost tentatively stated. She often focuses on tiny gestures or movements in her subjects, undercutting the traditional, authoritative monumentality of bronze sculptures. Her figures are usually inward-looking, reflective. A sense of isolation or, more accurately perhaps, separateness, comes through, even in family pairs or groups.

Born in 1919, Melanie was the younger sister of Louis le Brocquy. If his artistic reputation tended to overshadow hers, nevertheless her peers held her in consistently high regard. While Sybil was a writer with a keen interest in the arts and a wide circle of friends in the literary and art worlds, her husband Albert was focused on business careers for his children. Like Louis, Melanie resisted his wishes. He was persuaded that art school might lead to a job as an illustrator. At art school (now NCAD), she quickly switched from painting to sculpture and was a high achiever. Later she spent time in Europe on a Taylor Scholarship.  At the beginning of what seemed like a promising artistic career in the early 1940s, she married (Stanley Stewart, a bacteriologist in TCD), all but quit her artistic work and devoted the best part of 20 years to running a house and raising her four children. When she returned to sculpture she found she was slow to win acceptance, but travels in the United States in 1966, during which she visited many museums and galleries, galvanised her and she worked consistently following her return to Ireland.  Not that she speeded up her working process, which remained slow and meticulous. She was from the first a modeller rather than a carver, and usually worked directly with clay or, at one point in the early 1960s, plasticine, rather than via preparatory drawings. The calm, meditative nature of her work contributes to its quiet, enduring appeal.