Vibrant decade of art in the Sacred Heart Hospital, Castlebar 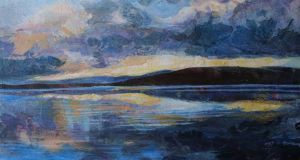 MARIE WOOD – TEN YEARS ON, ART IN THE SACRED HEART HOSPITAL/CAPTURING THE LIGHT

Custom House Gallery and Studios, The Quay, Westport, Co Mayo, Until September 22nd, customhousestudios.ie A show celebrating work made in the past 10 years in the Art Room of the Sacred Heart Hospital in Castlebar, facilitated by artist-in-residence Tom Meskell, whose open, inclusive, collaborative approach informs the strength and variety of the work on view. Marie Wood’s fine landscapes, meanwhile, made from photographic studies, using mixed media and collage (of painted and printed paper), reflect her response to her immediate Mayo surroundings – she settled in the county five years ago.

The latest instalment of Paul Hallahan and Lee Welch’s series in which they respond in their respective ways to the ideas of Utopia and the putative end of history. Hallahan is interested in the mechanics of perception at micro and macro levels, Welch in “the primal mind” and the instinctive gaze.

Cloghane-born Michael Flaherty began his working life as a teacher but, taking a year out, began drawing and found himself transported into a new world. So he studied art and for many years now he’s been painting intensely coloured land and seascapes charged with energy and light, latterly based back in the Kerry setting of his childhood.

ANITA GROENER – THE PAST IS A FOREIGN COUNTRY

As a Dutch-born artist long resident in Ireland, Anita Groener has consistently addressed ideas around migration, family ties and belonging. Her most recent exhibition and installation consider extreme examples of these in the form of the refugee crisis fuelled by the conflict in Syria. It is a calm, relatively understated but quietly powerful body of work with contributions from several collaborators.