Animals have played a central role in the artist’s work 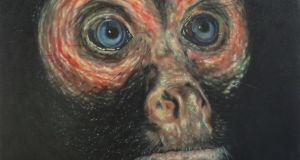 Detail from Hiberno God by Dermot Seymour (oil on canvas, 2008)

What is it? A close-up painting of a wide-eyed young simian (perhaps a spider monkey) by Dermot Seymour.

How was it done? Presumably taken from a photographic reference. From early on, animals have played a central role in Seymour’s paintings. He has been described as a photorealist, but his ultra-realism is not photographic. It’s more pre-photographic, even Renaissance, in character – the Northern European Renaissance, that is, given a certain harshness of tone and colour that runs consistently through his work.

Where can I see it? Hiberno God is included in SILVER, a group exhibition marking Kevin Kavanagh’s 25 anniversary as a gallerist in Dublin (Kevin Kavanagh Gallery, Chancery Lane, Dublin Until December 21st kevinkavanagh.ie). Kavanagh began with the Jo Rain Gallery in Anglesea St before moving across the river to Great Strand St – and changing the gallery name. As a new arrival, Jo Rain had a lively and unpredictable energy. Kavanagh, who has strong literary interests besides a liking for visual art, brought a new sensibility to the Irish gallery scene at a time when a younger, highly capable, generation of artists was emerging. SILVER is a personal choice of mostly recent works by many of the artists he has worked with over the years (including Robert Armstrong, Gary Coyle, Vanessa Donoso Lopez, Kathy Tynan, Diana Copperwhite, Paul Nugent, Stephanie Deady and more).

Is it a typical work by the artist? Yes and no. Seymour is probably best known for his representations of animals, domesticated and wild, naturalised in Ireland. That includes several kinds of fish (he is a fisherman), numerous cows, sheep, dogs, goats, hares and more. At one point he became known as a painter of cows. As he pointed out, there are many more cows in Ireland than humans. His depictions of animals usually refer to the activities of humans.

Born in Belfast, he grew up during the Troubles, and his first mature work dealt with the experience of living in the North. He has on occasion, and wrongly, been labelled a surrealist (his own term, magic realist, is closer to the mark). An easy mistake given that much of that early work derived from what he perceived as the surreality of Northern Ireland, arising from the bizarre, disturbing collision of the militarised and the ordinarily rural, and the fact that everything in the North had a kind of identity code – even a cow could be a Protestant cow or a Catholic cow.

His penchant for acerbic, satirical commentary established, he moved south of the border and is based in rural Co Mayo. From there he has made work commenting on agribusiness, the Celtic Tiger and its aftermath, politics and celebrity. His 2007 exhibition, eyed, concentrated on the nature of the gaze, using animals and human exemplars. Continuing the same line of enquiry, it was followed with Hibernium: A Trip Across the Head of Ireland, in 2010. Hiberno God featured in that show.