When the world’s best photographers came to Ireland, here’s what they saw 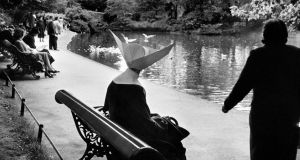 Before Instagram shared the world via little square boxes on a screen, photographers were making it present through hugely influential magazines, and Ireland was in their sights. In the 1950s, three of the most famous came: Henri Cartier-Bresson, regarded as the world’s most pioneering photographer, was on an assignment for Harper’s Bazaar; Dorothea Lange had come to capture Ireland for Life magazine; and Robert Cresswell was here researching his seminal anthropological study, Une Communauté Rurale de l’Irlande/A Rural Community in Ireland.

Opening tomorrow, a major exhibition at the National Museum of Ireland at Collins Barracks brings a selection of their work together, including many never seen on public display before. The photographs and digital displays show all the expected tropes of Ireland in the 1950s, as well as some surprises. There are scenes at the races, countless binoculars trained on the track; families dressed in Sunday best on their way from church; farm scenes, such as the butchering of a pig; upturned currachs looking like mussels on the bay; the wilds of the country; and city streets and lanes.

Cartier-Bresson’s genius is to add a layer of humanity that survives the distancing of time. ‘The most difficult thing for me is a portrait,” he said. ‘You have to try and put your camera between the skin of a person and his shirt’

Colour photography had been invented in 1907, becoming popular in the 1930s, but these images are all in black and white. There’s something about the monochrome that adds a sense of distance: like the footage of the first World War we were so used to seeing until Peter Jackson colourised it for his 2018 documentary, They Shall Not Grow Old. Suddenly the war had happened to people, not to spirits of the past.

So there is a sense of “spirits of the past” to many of these images, but Cartier-Bresson’s genius is to add a layer of humanity that survives the distancing of time. “The most difficult thing for me is a portrait,” he once admitted. “You have to try and put your camera between the skin of a person and his shirt.” According to Fidelma Mullane, cultural geographer and curator of this exhibition, Cartier-Bresson wasn’t interested in portraying an image of a country, rather in taking the images that caught him as he went along.

This is typical of his approach. Famously interested in the “decisive moment”, Cartier-Bresson was a pioneer of street photography and also epitomised that adventurous spirit in his life. He was born in northern France, into a family that had made their fortune in textiles, one of their most popular products being “shiny Irish thread”. He studied painting with André Lhote – just six years after Mainie Jellett and Evie Hone had been there and then spent time with the Surrealists.

He also had a passion for Ulysses, saying of his time as a conscript in the French army, “I was toting Joyce under my arm and a Lebel rifle on my shoulder.” Influenced by Joseph Conrad’s Heart of Darkness, he went to the Cote d’Ivoire and nearly died of fever; he acted in a film by Jean Renoir; and escaped from a German prison camp (on his third attempt) during the second World War. He co-founded Magnum Photos as, in his own words, “a community of thought, a shared human quality, a curiosity about what is going on in the world, a respect for what is going on and a desire to transcribe it visually.” In 1948, he was with Gandhi shortly before his assassination and his photographs of the Indian leader’s funeral are defining.

Cartier-Bresson’s focus when it came to the people of Ireland was astoundingly astute. I think he was aware that things were about to change. He could feel it in the air

But something clearly attracted him to Ireland. Ten years after his 1952 assignment he returned for a holiday and took some 4,000 photographs, which Mullane had the privilege of going through at the Cartier-Bresson Foundation in Paris. “Looking at the contact sheets, I could see his criteria – he had marked the ones he was happy with – it was very interesting.” While she says this didn’t actually feel like being in the great photographer’s presence, one can only imagine the frisson one would get from being so close to his process.

On his second trip, Cartier-Bresson took photographs all over the island, save for Ulster. “His focus when it came to the people of Ireland was astoundingly astute,” says Audrey Whitty, head of collections at the National Museum. “I think he was aware that things were about to change,” she says. “He could feel it in the air. He was looking at the leisure activities of the ordinary people, but he was also showing it in context of the people in power.”

This obviously means the church. He took some remarkable images, not in this exhibition, of lines of black-frocked priests and seminarians at Maynooth, watching a football game from the sidelines (you can see them online at magnumphotos.com). Alongside church influence, Cartier-Bresson also caught something else: “the incredible resilience of the people,” says Whitty. “And also the happiness, how they got on.”

Best known for her work photographing displaced farmers during the American Great Depression, Lange came to Ireland in 1954 and headed for Co Clare. She was most probably influenced by the famous Harvard study of the region carried out in the 1930s, and her images seem to be touched both by that earlier sense of Ireland and also of her experiences in Depression America.

Cresswell came from a different background entirely. An anthropologist, he spent 15 months documenting the lives of the people of Kinvara parish in Co Galway, in 1955 and 1956. His notes on his shot accompanying the snaking Corpus Christi parade describe how the priest isn’t leading, but at the rear, “pushing the congregation”. Ireland clearly resonated with Cresswell too. When he died, he left his archive from the period to the Kinvara community and you can now see it online at kinvara.ie.

Cartier-Bresson’s views changed over time. He had said, “I’m not all that interested in the subject of photography. Once the picture is in the box, I’m not all that interested in what happens next. Hunters, after all, aren’t cooks”. But he later remarked that, “As time passes by and you look at portraits, the people come back to you like a silent echo. A photograph is a vestige of a face, a face in transit. Photography has something to do with death. It’s a trace.”

Photography in Words: The World According to Cartier-Bresson

Ireland in Focus: Photographing Ireland in the 1950s is at the National Museum of Ireland’s Decorative Arts & History branch, at Collins Barracks, Dublin 7, from tomorrow until April 2020; admission is free