The women designers who changed the world 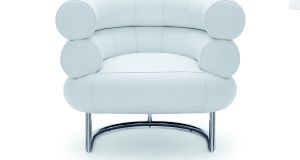 Lavishly illustrated coffee-table books on design aren’t usually associated with meaty introductions with a serious political bent. However, a new book from mother and daughter architecture and design-writing duo Charlotte and Clementine Fiell is just that.

The idea for Women in Design: From Aino Aalto to Eva Zeisel sprung, they say, from the 2018 centenary of votes for women and from a British Design Council survey published that year which found that just 22 per cent of the UK’s design workforce were women, despite the fact that 63 per cent of all students on creative arts and design courses are female.

By any measure, that’s a huge attrition rate – and figures from the US are similarly skewed. Further, women who remain in the industry – from architecture firms to graphic studios – tend not to rise to the better-paid top positions, a fact replicated in so many other industries.

In choosing the 100 women to feature, the Fiells narrowed it down from a much larger field – there really was a very large number to choose from, say the authors – to women who were trailblazers, who have influenced today’s designers and who had or are having “an undeniable impact on contemporary design and its professional practice”.

They also went for the broadest possible interpretation of designer, so the women represented range from fashion designers such as Coco Chanel, Mary Quant, Rei Kawakubo and Miuccia Prada, to architects Zaha Hadid and Amanda Levete and General Motors’ Damsels of Design from the 1940s and 1950s.

Eileen Grey is there, of course, the only Irish inclusion, because as an “outlier” with “prodigious talent . . . her designs bridged the ideological transition from sumptuous French art deco to full-blown steel-and-glass modernism”.

Finnish designer Aino Alto, is just one women featured whose productive and prodigious careers saw them collaborating with their husbands, fathers or male colleagues, leaving their significant contribution to key projects, especially in the area of furniture design, either overlooked, minimised or forgotten.

Included in that category are Bauhaus women textile designer Anni Albers and product designer Marianne Brandt; Ray Eames – one half of the 20th century’s power couple of design, whose husband Charles soaked up most of the limelight; and Nanna Ditzel, a key figure in 20th century Danish design who worked for six decades creating prize-winning and best-selling furniture, including her Ring Chair (1958) co-designed with husband Jorgen Ditzel.

British textile designer Lucienne Day, who changed the look of so many suburban homes through her mid-century modern, reasonably priced fabric, is a rare example of a designer as well-known as her high-profile husband, Robin, from whom she worked separately.

Fascinating careers are documented, such as Belle Kogan’s (1902-2000) – she is widely regarded as being the first female professional design consultant in the US. In the 1930s, she was an early adopter of plastics, working with several manufacturers including Warren Telechron, for which she designed the whimsical Quacker alarm clock (1934).

Also: Gertrude Jekyll (1843-1932), who completely redefined the English country garden, creating naturalist landscapes where formality had ruled; Edith Head (1897-1979), arguably one of the most famous costume designers of the 20th century, whose long list of movie credits include The Birds and Roman Holiday; and Dorothy Draper (1889-1969) who professionalised the job of interior design, opening her own company in 1925 and who alongside high-profile residential and commercial projects empowered a generation of American women with her bestselling Decorating Is Fun! how-to book.

The Fiells included General Motors’ “Damsels of Design” (each woman name-checked and fully credited in the book – they hated the demeaning “Damsels” label) from the 1940s-1950s. Legendary automotive designer Harley Earl noted that when it came to car-buying, women tended to have the last word so to appeal to them he employed a team of female designers who went on to choose the colours of the interiors and install features that have now become standard in all cars – such as retractable seat belts, child-proof door locks and illuminated make-up mirrors.

A real insight into how design impacts on our daily lives is the look at the career of South African graphic designer Margaret Calvert, who, working with Jock Kinnier in London, created so much of the street signage we are familiar with – although for decades her contribution went largely unacknowledged. Her “children crossing” sign was based on a photograph from her own childhood, showing her leading her little brother by the hand across the road and reflected, say the authors, the “shifting sands of gender equality in 1960s Britain”.

Contemporary kitchen designers may not realise it, but their work is informed by the Frankfurt Kitchen designed by Margarete Schütte-Lihotzky, Austria’s first female architect, in the 1920s and based on time and motion studies. Her compact kitchens included a fold-down ironing board, a swivel stool with everything within easy reach on a carefully planned worktop and integrated storage containers.

Her work is a particularly fine example of the authors’ contention that “introducing a female sensibility to problem solving contributes to a psychologically broader and more human understanding of design”.

Women in Design: From Aino Aalto to Eva Zeisel by Charlotte and Clementine Fiell is published by Laurence King