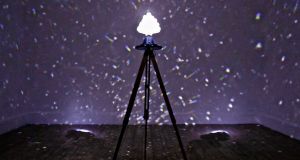 A survey show marking 15 years of the collaborative partnership of Gareth Kennedy and Sarah Browne, featuring three installations addressing contemporary issues in the areas of labour and politics in relation to exponential developments in pervasive technology and social media. The three research-based pieces are How Capital Moves (2010), The Myth of the Many in the One (2013) and Real World Harm (2018).

Our Choice Our World

The curatorial team involved in putting this show together is made up of students in fifth and sixth class at Scoil Bhríde Primary School in Mountrath. They had their pick of Kevin Kavanagh Gallery’s online storeroom. One of their most popular choices was Dermot Seymour’s Great Protestant Cow of Aghalee. Thematically, the environment, animals, landscape and home were prominent. Artists include Stephen Loughman, Kathy Tynan, Cecilia Danell, Diana Copperwhite, Robert Armstrong and more.

Anthony Scott has attracted quite a following for his stylised animal sculptures. While the animal imagery that appeals to him stems from his background, he was decisively influenced by the way Irish myths and legends provided another, narrative dimension. This show see him broaden from animal to human subjects with a series of “Hunter” figures.

Vanya Lambrecht Ward has worked in theatre and television and is currently a resident artist at The Dock, Carrick-on-Shannon. With a particular interest in the built environment, she has employed photography, sculpture, painting and, as here, paper. Paper, that is, as a sculptural material. Origami jumps from two dimensions to three, a usefully concrete feat in an increasingly flat and virtual world. The show is directed primarily at the younger visitor.