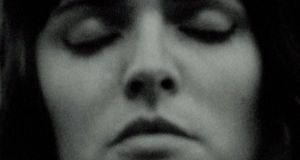 What is it? Personal Growth is a new Super 8 film work by longtime collaborators Vicky Langan and Maximilian Le Cain.

How was it done? Super 8 is an enhanced 8mm home-movie film format launched in the mid-1960s. It does not work on standard 8mm cameras but offers larger film area and, at a later point in its history, a convenient sound-recording facility. The fact that Super 8 film came in light-sealed cartridges greatly contributed to its ease of use, and it became a very popular amateur film medium, only displaced in time by the advent of portable videotape recorders. In the meantime, though, its reputation had grown among professionals, to the extent that several kinds of Super 8 film stock are still in production. Even now it remains popular with film-makers, artists who work in film and art students.

Langan and Le Cain employ it in a way that recalls its popularity as a home-movie medium. In the film, screened in grainy black-and-white, they play a couple who act out a series of domestic interactions of personal significance to them, if puzzling for us. They do so not within a conventional domestic setting, however, but in a vast, dramatic shoreline landscape.

Is it a typical work by the artists? It is typical in that it arises from a decade-long collaborative partnership that has produced 16 moving image works, including the extraordinary, feature-length Inside (2017). Langan has a substantial reputation as a performance – with the emphasis on durational performance – and sound artist, work that feeds directly into the nature of her collaboration with Le Cain. That collaboration also includes live performance. Associated with the Experimental Film Society and besides being a prolific film- and video-maker, Le Cain also writes on film and takes on curatorial projects. Individually and collaboratively they don’t so much challenge narrative and visual conventions, as the habitual formulation would have it, as disregard them completely in an effort to find an intensely personal, honest means of addressing experience in all its strangeness and mystery. Which is quite refreshing. Somehow, their divergent talents and approaches produce an alchemical mix. Although it could be, and has been, described in terms of cinematic and thematic norms (answers to the question what is this film about, when it should be more, what is this film?), such summaries cannot do it justice. If you commit yourself to it, and despite the absence of narrative trappings it is curiously, hypnotically watchable, it takes you to a place of such interiority that it is unsettling, even disturbing, but also very rewarding. In other words, any new project by Langan and Le Cain is bound to be worth seeing.