Nature up close and far away 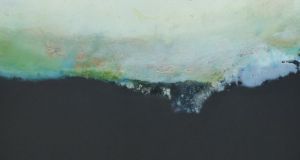 Limen, as Gwen O’Dowd titles her fine recent series of paintings, is a perceptual threshold, the point on either side of which a stimulus is or is not apparent. We can take it that her paintings have crossed the line into visibility, though they harbour great pools of darkness, deep inky expanses. Take away the ragged luminescent fringes that unmistakably suggest white horses, or the eerie blue phosphorescent glow, equally associated with the sea, and we could be on the other side of the threshold, faced with a kind of nothingness.

O’Dowd studied at NCAD in Dublin. Looking at a record of her exhibitions from about 1990, it’s evident that she immediately looked beyond the urban, not just into the rural but into a vision of nature that recalled the Romantic Sublime, landscape as an arena shaped by the play of vast, elemental forces. She works in series and while she has usually linked each series to a particular landscape motif, those motifs are in effect, more often than not, quite general: wave, or cave, or shoreline.

It’s true that her use of Irish titles – Tonn, Uaimh, Cladach – placed the paintings on the Irish coast, mostly the west coast (though in recent years she has spent time on the southeast coast), but more as a matter of record, not in the sense of being about any one place. It was mildly surprising when in the mid-1990s she painted the Grand Canyon, very specifically and almost schematically and, more recently, made a series of fine watercolour studies of birds. In the meantime, much commentary on her work not unreasonably saw aspects of the landscape imagery as symbolically or metaphorically relating to the body and sexuality.

Not unreasonably, but at the same time it would probably be a mistake to overly anthropomorphise the paintings. Equally, while it makes sense to view her work in an ecological context, O’Dowd has always been careful not to claim an environmental agenda. She could easily have done so at any stage, and certainly in relation to the Limen paintings, which evoke the immense power of the earth’s oceans at a time when they are the focus of climate and environmental crises.

A great deal of her work hinges on the interaction of sea and shore. Water tirelessly eats into stone, carving out space, creating space. These recent paintings are pretty much devoted to water. Where there are walls, they are walls of water. Waves tower and break. Limitless energy, one feels, is at play. Somewhere in the background lurks Rothko’s basic compositional armature, two zones demarcated by a horizontal division. The restless energy of O’Dowd’s paintings, as one zone destabilises or threatens to devour the other, continually disrupts the possibility of stasis, yet they do have a wonderful poise, nonetheless, a hard-won magisterial calm.

Particularity rules in the closely observed works of Yanny Petters’ Hedgerow. She is well known for her exemplary botanical watercolours, usually of wild plants, and, more recently, for her ventures into verre eglise, painting in reverse on glass. Both play a part in the considerable and diverse sets of work in Hedgerow, sometimes with a twist. Her precision and attention to detail does not mean narrowness of focus. In fact they complement the expansiveness and generosity of her vision.

The heart of her show is a set of four large-scale watercolours, charting four seasons in one small pocket of a hedgerow. Her subtitle, Stories from a Linear World, alludes to the passing of the seasons in the linear forest. Each of the four seasonal watercolours concentrates on the same location as it changes. That location is apparently immediately adjacent to her home and studio. The watercolours are close-ups and an accompanying series of five large pencil drawings provides the long-shots as the undulating pattern of the hedgerow unfolds across the wall.

In returning through the year to the same place, Petters emphasises that the hedgerow is, as she suggests, a world, a small multi-dimensional ecosystem sustaining a web of living things, from micro to macro, flowering and fruiting plants, a mass of insects and animals. Everything is factually conveyed, but a note of wonder is evident, perhaps related to the magic associated with woodlands, from A Midsummer Night’s Dream to The Wind in the Willows. Also, her attentiveness has a meditative quality as she gradually puts a form on time.

Another series of works draws on her experience of gilding and etching on glass, a variant of verre eglise, which, she notes, she encountered when she trained as a sign-writer. Her Hedgerow silhouettes, combining gold leaf and pigment, are botanically precise, elegant compositions with great texture and depth. Gold leaf is again put to excellent use in a set of beautiful miniature pieces in which a leaf – literally a gold leaf – is set against a wood sample from its parent tree. The array, compiled with some assistance from Hugh Cummins, spans the range of hedgerow varieties.

Petters emerges as an advocate for slow, patient looking, though that would not count for so much if her patience were not allied to her considerable instinct and skill in making.