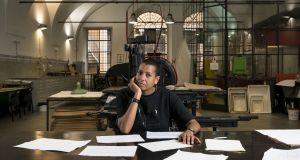 Helen Cammock: ‘I want to talk about injustice and oppression and people being interconnected.’ Photograph: Sebastiano Luciano

Turner Prize nominee Helen Cammock considers Northern Ireland’s political situation in her east London studio. Mug of tea in hand and surrounded by stills from her latest film, she asks: “Why are people not out on the street? Why are they not shouting about this? Why are they not demonstrating against the injustice that’s happening to them again?”

The English artist, whose film on the role of women in Derry’s civil rights movement has been shortlisted for the highest honour in the British visual art world, says she is “surprised” that Northern Ireland’s history of protest has not led to more demonstrations against Brexit and the breakdown of Stormont.

While she stresses she is not trying to instruct people in Northern Ireland how to react to Brexit, she says: “It’s like they’re a pawn in a huge political campaign all over again. I am shocked by the wave of right-wing, fascist thinking. It’s been bubbling away and it’s been reignited by some very manipulative politicians and the media.”

Born to a “very political” Jamaican father and a mother with Irish roots, Cammock (49) followed The Troubles on a daily basis as a child but she had never visited Derry before receiving a commission from the city’s Void Gallery last year to create The Long Note.

The exhibition moved to Dublin’s Imma last March and is now on display at the Turner Contemporary in Margate, Kent, where the winner of this year’s prize will be announced on December 3rd.

The Long Note weaves through archive footage of marches 50 years ago and interviews with women who took part in them, including campaigner Bernadette Devlin. Footage of the Selma to Montgomery marches in the US civil rights movement and a performance by Nina Simone punctuate the Derry scenes to “make links between struggles that are global struggles”, says Cammock, who is up against three other artists for the prize.

Despite the film’s success, she had “anxieties about making the work” as a British woman who had never lived in Northern Ireland.

She was a social worker for 10 years before becoming a full-time artist and her previous work has discussed injustices relating to blackness, womanhood and social inequality. “In films I’ve made, I’m working with issues that directly affect me. This was different.”

Her aim was to magnify “voices that are often written out of histories” and she believes the stories of the Derry women can resonate with modern viewers regardless of their background.

Despite the political inertia in Stormont, Cammock has been encouraged by the success of Northern Irish culture in recent years. She mentions the acclaimed TV series Derry Girls and the Booker Prize winning Milkman and her exhibition features a table strewn with Irish literature, including Anna Burns’ novel.

In another short film, she cites African American writer James Baldwin as an inspiration when he says: “If you alter even by a millimetre the way that people look at reality then you can change it.”