Thirty years of Tallaght: Pete Smyth’s view from the inside

Smyth never romanticises or sentimentalises Tallaght. Nor does he judge or deride it 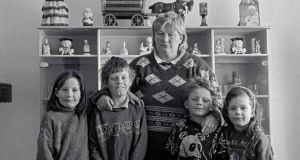 The Grocott Family by Pete Smyth

Local: Pete Smyth
Gallery of Photography, Dublin
★★★★☆
In 1988, like many Dubliners, Pete Smyth and his family relocated from the inner city to Tallaght, setting up home at Cushlawn Park. Still in greater Dublin, perhaps – it later acquired a postcode – but also another world. Tallaght’s flat, uninhabited expanses, spread out at the foot of the Dublin mountains north of the river Dodder, made it a logical choice for one of the four new towns proposed for Dublin in the late 1960s. But the transformation and exponential expansion of a village of about 2,500 people (the population is now estimated to be about 76,000) happened without careful, coherent social planning. In fact, with blatant disregard for coherent planning.

The development of Tallaght was a kind of uncontrolled social experiment. The prevalent narrative is that, over several decades, Tallaght plunged into a destabilised state of haphazard development, beset by inevitable social and cultural problems along the way, and very slowly, eventually, emerged from relative chaos to a situation of comparative stability, gaining a sense of identity in the process.

From his arrival in Tallaght, Smyth was taking photographs of the community around him. Over the years he devised and completed a number of distinct thematic projects, but always concentrated on aspects of Tallaght. Unlike work produced by several photographers who visited temporarily, Smyth’s has the unmistakable quality of being made from the inside out.

He is part of the community, not an outside observer. Taken together, as they are in Local, an excellent new publication from the Gallery of Photography, his sequential projects amount to an insider’s photographic account of the evolution of contemporary Tallaght. Fellow photographer Ken Grant’s eloquent and richly detailed text is an illuminating and informative guide to Smyth’s work and attitude.

Attitude is important. Smyth is a community activist. His initial Tallaght photographs were shown under the title A View from the Dearth at the Gallery of Photography, then on Wellington Quay, with Christine Redmond as curator. Smyth has been associated with the gallery since and is probably familiar to regular visitors.

Those early photographs are group portraits of Smyth’s neighbours in their front rooms. They are formal, careful and respectful, and they evidence a gift for empathy that has been fundamental to pretty much everything he’s done since, and contributes to the revealing frankness of many of his portraits. The connection is reciprocal between photographer and sitter. If there is no trust, it can’t work.

That’s particularly evident in a remarkable series of portraits of Traveller women. Smyth’s achievement here is to present us with individuals, not types, not in any sense other, in a way that recalls Renaissance portraiture.

The body of work that steps furthest away from documentation, Five Years among the DPLIPHE, articulates his developing view of Tallaght’s population as perceived by the establishment. The DPLIPHE are Disadvantaged People Living in Peripheral Housing Estates. Enlisting local young people, Smyth has them enact the roles of a tribe, or perhaps a dissident group, militantly aware of their position of disadvantage.

For a disregarded community, activism was essential. Such was the case when, in time, drugs became a major problem among the maturing younger population and local people were spurred to organise themselves in opposition.

As Grant details, a significant proportion of the work centres on the Killinarden House, the locus of communal recreation and celebration. To take photographs in that context involves not just nerve (Grant relates how Smyth reported that, on his initial visit to the pub, he noticed a customer drinking a pint while wearing a crash helmet, with a hammer lying on the table in front of him) but a sense of ethical responsibility.

To picture people at play, their defences down, freed from inhibitions, could easily become voyeuristic and exploitative.

As with the rather extreme case of artist Richard Billingham, whose photographers of his chaotic family background earned attention and some notoriety, Smyth is part of the world he’s recording, and is not judging or deriding it. He has made many fine photographs, incidentally, of people in the wider physical environment. Images of isolated figures negotiating endless strips of pathway through empty, anomalous terrain, with distant prospects of housing developments and the high, cold ground beyond, powerfully convey the reality of a new town, caught between a resolved urban future and a rural, agricultural past.

Smyth never romanticises or sentimentalises Tallaght. He doesn’t try to disguise the rough edges, the fissures, abrasiveness and problems associated with its history. Through a combination of accident and artifice, a photograph of an individual or individuals will always convey more than its maker intends, more than its subject presumes.

The artifice is contained in the photographer’s conscious aims, the human subjects’ view of themselves. The accident is everything beyond those two domains. Like other good photographers, one of Smyth’s great strengths is his driving curiosity, his openness to that space beyond, and whatever might be revealed there. Until January 12th, galleryofphotography.ie

The publication Local, by Pete Smyth (with an introduction by Ken Grant) will be launched on November 29th at the Gallery of Photography at 6.30pm