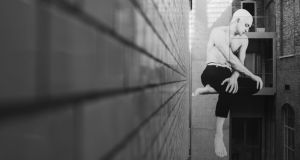 Finding Power: Joe Caslin’s mural is a testament to a post-abortion-referendum idea of what power might mean. Photograph: Gavin Leane/National Gallery of Ireland

What is it?
Finding Power is a huge mural of the writer and activist Stephen Moloney by Joe Caslin. It is part of the Roscommon-born street artist’s investigations of power, its meaning, how it is constructed, and what it means to have or to lose it, or never to have had it at all. The vulnerability yet quiet, dignified strength of the pose make it a testament to an emerging post-abortion-referendum idea of what power might mean; to individuals, drawing on the resources we all hold, that can come to mean something far greater when we gather together.

How was it done?
Caslin worked with the team at the National Gallery of Ireland and a panel of private and public figures, which included the comedian Alison Spittle, the mother and asylum seeker Chidi Muojeke, and the Independent Senator Alice-Mary Higgins. Gavin Leane took photographs of each panellist; Moloney’s portrait was then selected to be the subject of one of Caslin’s highly detailed drawings, which was scaled up and printed on vinyl. The resulting image is four storeys high, and was installed at the gallery over two days. If you love it but live in a much smaller space (don’t we all?) the National Gallery is selling limited-edition posters of the work for €10.

Where can I see it?
Finding Power has been installed in the courtyard at the National Gallery of Ireland, in Dublin. In 2015 Caslin made a now-famous work that referenced one of the NGI’s most popular and celebrated paintings, Frederic William Burton’s Hellelil and Hildebrand, the Meeting on the Turret Stairs. Caslin’s take on the painting, which shows a couple in a furtive anguished cuddle, was installed on a gable wall on South Great George’s Street in Dublin in the run up to the marriage-equality referendum. In Caslin’s version, called The Claddagh Embrace, the couple were same-sex, and the work featured widely in the media, including in the New York Times. Two years later the National Gallery invited Caslin to be part of the education programme surrounding its exhibition of Burton’s work, a project that led to the creation of this work.

Is it a typical work by the artist?
Yes, in form and style, if not in location. Known for his huge murals, Caslin is an illustrator, art teacher and activist, as well as a street artist, and his best-known work engages with social issues. Part of the poetic beauty of his highly detailed, evocative drawings, which are usually sited on external walls, that while many, such as The Claddagh Embrace, define a moment in time, they are also deliberately ephemeral. Wind and rain dissolve the paper, so that within just a few short weeks they vanish, leaving nothing except memories and, sometimes, a change of mind and attitude among those who have experienced them – and, yes, social media shares, too. Plenty of those.