The Art of Being Here: Brian O’Doherty’s restored murals at Sirius in Cobh are a revelation 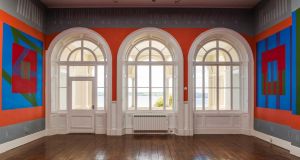 The galleries at the Sirius Arts Centre in Cobh have to be some of the most beautiful in Ireland. The arched windows of the former Royal Cork Yacht Club have views across the water, and the building was designed to be impressive, whether approached by land or sea. It was opened in 1854, which means that it was under construction during the Famine years, and had been designed by Anthony Salvin, whose stock in trade was creating great houses for the English aristocracy.

So if ever a building could have ghosts, it would be this one, not least because the rescue for the Lusitania was led from Cobh, and the Titanic called in too. All of this appealed to artist Brian O’Doherty, whose glowing jewel-like murals dance across the Sirius walls. Extravaganzas of bold modernism, yet with a distinctly Irish twist, they’re also oddly timeless. The paintings had also been lurking, half forgotten, behind layers of paper and paint for more than 20 years.

O’Doherty himself had departed from Cobh, when he first left for America where he has made his home for more than half a century, building up a major career as an artist, writer and film-maker. It’s a place that resonates with him – he has described the feeling of walking in the footsteps of generations of emigrants as he went to board the transatlantic ferry. When he returned, in 1996, at the invitation of Peter Murray, he was determined to create a monument to that sense of place, and of transit.

Back then he was working under the name Patrick Ireland which he took in 1972 as a protest following the Bloody Sunday killings in Derry, vowing at the time that he wouldn’t take back his own name until the British presence was removed from Northern Ireland, and all Irish people had their full civil rights. The artist Lee Krasner, wife of Jackson Pollock, remarked to him that he’d never get his name back, though he did, formally burying Patrick Ireland at a ceremony at the Irish Museum of Modern Art (Imma) in 2008.

Now that I’ve got less permanent, I would like to do some permanent installations

The Name Change went down strangely. Artist Robert Ballagh was a strong supporter, carrying the coffin. Elsewhere people weren’t quite sure how to react. The “Northern Question” was a source of confusion and embarrassment to many in the South. Internationally it was received differently. Art-world luminaries from across Europe and the US came to the Imma ceremony, treating the event with a reverence that influenced the sceptical among the Irish contingent, so that they too came to believe, as fervently as if they had done so all along.

O’Doherty is no stranger to the ambivalence of Ireland to its artists, even though it is a country that prides itself on its creative strength.

“Ireland does not appreciate its foreign achievers,” he told me when I interviewed him for this paper in 2017. “It’s kind of an insult if you achieve. You’re supposed to fail and then you’ll be adopted.”

When the murals at the Sirius were unveiled, president Mary Robinson attended the opening. And then they were papered over and all but forgotten. O’Doherty himself was a fan of impermanence. Deeply ambivalent about the avaricious rapacities of the art market, he had long prided himself on making ephemeral works. His geometric rope drawings would appear, such as Rope Drawing No 74, at Dublin’s Douglas Hyde Gallery in 1985, changing the space by creating parabolas and strange tricks of perspective, and then disappearing from all but memory and the odd art catalogue.

Now that O’Doherty is 90 his thoughts have changed. “Now that I’ve got less permanent, I would like to do some permanent installations,” he has said.

So, when Miranda Driscoll took on the role of Sirius director in 2014 and heard about the murals that lay behind the white walls of her centre gallery, she was intrigued. Peeling back some of that paper at that time, she showed me an emerging “A” painted on the wall, and a hint of a strip of colour.

A restoration project followed and the murals began to emerge, damaged, but salvageable. Now, fully recovered, they are on view to the public until next April. Brightly painted in blue, red, green and purple against a grey ground, you see what appears to be geometric shapes, mazes or op art constructions. They’re of their time, but also refreshingly present.

In fact, the patterns are anything but random, and are based on O’Doherty’s fascination with Ogham, the ancient Irish language that was always written down, never spoken aloud. The lines and stripes spell out the words “One Here Now”, a statement of presence, and also of existential defiance. Imagine the sense of an emigrant, one person, in one place. Here. Now. It’s a presence that lingers and yet also travels, perhaps a perfect summation of the Irish experience.

It is the genius of the work that it whispers in enigmas. Ideas fill the mind, even as the bold blocks of colour create visual paradoxes that make the walls dance, fold in on themselves, and reach forward. It is as if O’Doherty has dissolved the physicality of the building, at the same time as he has given it an even more powerful presence.

One Here Now is one of the very few permanent installations of this artist’s work in the world, and this despite the fact that his work is held in major collections including the Pompidou in Paris and both the Metropolitan Museum and Museum of Modern Art in New York. Its restoration and preservation at Sirius makes this a significant heritage site, for a new conception of what Irish heritage may be.

Eventually, the murals will be preserved, behind false walls, still whispering their mantra of presence and absence; and ready to emerge again in whatever future we face.

O’Doherty’s work is also on show at Imma, Dublin, in Brian O’Doherty Language and Space, until September 18th, imma.ie; and features in Double Take at the Glucksman, Cork until July 8th, glucksman.org.

Shelbourne statues: Will we ever see them on St Stephen’s Green again?
6

Can a work of fiction about the Holocaust be inaccurate?
7

John Hume restored to his rightful place in Irish history
10