Michael Jackson at Lugalla: He asked for ‘the portrait of the freaky-looking man with the frizzy hair’ to be taken down

Portrait-painter Anthony Palliser on his friendship with Garech Browne, halcyon days at Luggala and his famous Irish subjects 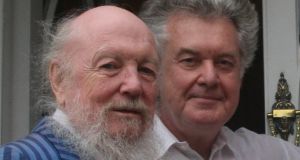 The first time I visited Anthony Palliser’s Paris home, back in 2007, I found the poets Derek Mahon and John Montague in the Anglo-Belgian painter’s studio, which doubles as a sitting room, along with the composer Bill Whelan and Garech Browne, the Guinness heir who passed away this winter.

When I returned to interview Palliser in mid-May, the room felt depopulated. The dozens of Irish men and women had gone, as it were, to where they belong, to Dublin, where you can meet them at the Farmleigh Gallery in Phoenix Park throughout the summer.

Gerry Smyth, the poet who was then a managing editor at The Irish Times, requested an article about Palliser’s paintings and his friendship with Browne, the owner of Luggala estate in Wicklow and a great patron of the arts. Browne co-founded Claddagh Records in 1959, and played a key role in the revival of Irish traditional music.

For 16 years, Browne encouraged Palliser to paint Irish cultural figures. Browne was the driving force behind this summer’s show at Farmleigh. In Palliser’s last portrait of him, Browne is older and more white-haired, but with the same bald pate, impish smile and wispy beard I’d seen in earlier portraits. The portrait is printed on the invitation and the cover of the Farmleigh exhibition catalogue.

Browne came to dinner at the Pallisers’ five days before his death. Before travelling on to London, he accompanied Elizabeth Wassell Montague, the novelist and widow of Browne’s close friend, the poet John, to see Montague’s translator on the outskirts of Paris.

“Garech forgot his keys and money at the translator’s home, so the taxi had to turn around,” Palliser says. “Elizabeth told me it gave her an extra hour in his presence. Garech told her how excited he was about the exhibition, and how much he loved the last portrait I did of him, painted in a blessed moment and finished two days before he saw it. The paint was still wet.”

Browne and Palliser met in 1977, at the wedding of Loulou de la Falaise, the Franco-Irish high fashion model who became a designer for Yves St Laurent, and Thadée Klossowski de Rola, the son of the painter Balthus, whose work Palliser admires.

Browne and Palliser found themselves on a punt ferrying guests back and forth to an island in the Bois de Boulogne. They were having such a good time that they asked the boatman to take them back and forth several times.

Four years later, Browne married Princess Harshad Purna Devi, the daughter of the maharaja of the princely state of Morvi, western India. Palliser is a fine raconteur, in words as well as in paint, and he relishes telling the story of the wedding in Bombay for the umpteenth time.

“A maharaja’s daughter married an Irish aristocrat . . . The amount of liquor that flowed!” Palliser recalls. “Garech became a Hindu in a ceremony. He looked very much the part, sitting in the lotus position. He was in a bad mood, probably hungover. He said he’d probably get typhoid from having all that Ganges water thrown at him . . . I was best man, looking very stupid, as do all white men wearing turbans.”

The last time Browne came to dinner, he had just returned from visiting Princess Purna. “Garech spent part of every winter with her in India,” Palliser continues. “They had a special marriage in the sense that they spent much of the year apart, but they remained very attached to each other, in an extremely unconventional marriage.”

Palliser became a frequent guest at Luggala, the magnificent estate that Browne inherited from his mother, Oonagh Guinness. In August 2016, Browne invited President Michael D Higgins and his daughter, Senator Alice Mary, to lunch at Luggala with the Pallisers. “Not many people say no to lunch at Luggala,” Palliser says. Higgins agreed to be photographed for a portrait, which can also be seen at Farmleigh.

“At the end of lunch, the piper Neillidh Mulligan arrived with his son and daughter. The harpist Siobhán Armstrong played too. Then the piper’s daughter, a very pretty girl in her late teens, asked Garech if he’d like her to dance. The president’s bodyguards, big fellows, moved a table to make room. The father and brother went on playing while she danced. It was typical of Garech to create such magic. He had this sense of the moment.”

Since the 1990s, Palliser and Diane Lawyer, the woman he still calls his “bride,” have been inseparable. It became a tradition for Diane, a great cook, to use up her baggage allowance carrying groceries from Paris markets to Luggala. “For example, Diane cooked the lunch for Michael D,” Palliser says. “She was told there would be nine, then 12, then 14 people, all within the space of an hour. She was helped by Anna and Margaret, the staff at Luggala. For Diane, food is like motherhood. It’s a way of giving.”

The Pallisers always slept in the same room at Luggala, where Browne hung Anthony’s self-portrait. “When Michael Jackson stayed in my room, he asked for ‘the portrait of the freaky-looking man with the frizzy hair’ to be taken down,” Palliser laughs.

Palliser speaks of Luggala as an enchanted, spiritual place. Browne allowed no shooting or hunting on the grounds, though eventually the deer had to be culled. “One day we were driving on the narrow road up the hill and we had to stop because there was a wild turkey in the middle. Garech got out and looked at it and said, ‘Now what are we going to do?’ We waited until it walked away . . . He was a very gentle man. He could be fierce. He could be mean when he’d had one too many. Occasionally he wasn’t nice. But the basic man was a very kind, thoughtful man, very loyal in friendship.”

Palliser keeps a large envelope filled with thank you notes from his Irish sitters. He met all but three through Browne. Another close friend of Palliser and Browne, the actor Charlotte Rampling, facilitated the photographic session with Dame Edna O’Brien, which produced a drawing in the Farmleigh show. O’Brien had agreed to 10 minutes, and ended up talking with Palliser for over an hour. He has a habit of befriending sitters.

One of Palliser’s best paintings, his portrait of Graham Greene in the National Gallery in London, grew out of a similar experience. Greene expected sitting for his portrait to be an ordeal, but he and Palliser hit it off. They lunched together daily after sittings in Antibes. Greene later visited Palliser in Paris.

It was Browne who suggested the Pallisers invite Derek Mahon to dinner in Paris, years ago. They became fast friends, and Mahon visited the couple in Diane’s home town, Savannah, Georgia, where the Pallisers spend several months yearly. “Derek wanted a shabby room by the sea, which was easy to find,” Palliser recalls. “He went swimming every day, alone with the pelicans. It was cold and local inhabitants thought he was crazy.”

One day, when Palliser went to fetch Mahon for lunch, he asked the poet during the car ride, “When you were drinking, what was your favourite tipple?”

Mahon has been “totally dry for many years”, Palliser notes. “He said, ‘Ohhhh, well that depends entirely where you are’. It was the most fantastic, encyclopedic and adoring tribute to booze. Rum in Jamaica. Whiskey in Cork. He went through the different places where drinks could be had and how to have them. It was a refrain, almost like a hymn to booze. It should have been recorded and published.”

Palliser painted Mahon five times. Seamus Heaney was the only other Irish person he painted as often, and he believes the large Heaney portrait is his best. He speaks glowingly of his two meetings with the Nobel laureate, the second in the Paris studio/sitting room, two months before Heaney’s death.

Sadly, six of the Irish people Palliser painted have since passed away. All the others have been invited to the launch of the exhibition. Mahon has settled in Co Cork, but he is notoriously shy. “When I asked him, ‘Are you coming to the opening, Derek?’ there was a deafening silence,” Palliser laughs.