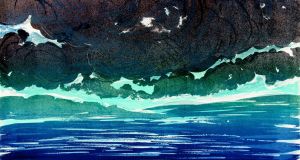 Dietrich Blodau’s 80th birthday last year was marked in December by a retrospective exhibition of close on 60 years of his work as an artist (still on view at the Hunt Museum in Limerick), and a beautifully illustrated, limited edition publication, Dietrich Blodau: A Life of Observations, with texts by Jessica Jenkins and Judith Hill (and designed by printmaker David Lilburn). It’s fair to describe the combined project, initiated by Blodau’s daughter Nina and son Peter, as a somewhat overdue acknowledgement of the achievements of an artist who has been a valuable and progressive presence in Limerick – and Ireland’s – cultural life since the 1970s.

Born in Recklinghausen in the northern Ruhr district in 1937, Blodau entered his teens in the strange, to some extent amnesiac world of postwar Germany. He was apprenticed as a carpenter, but an enduring passion for drawing led him in another direction and in his early 20s he studied graphic design in Dortmund where, in his first year, he won a competition for a poster promoting the city’s annual garden festival. Deftly encapsulating the region’s industrial heritage and a new dawn in German history, his still impressive design features a miner grinning through a mask of coal dust and delicately clutching a vigorous red blossom.

Although he worked briefly in design following graduation, he gravitated from applied to fine art and again enrolled to study, this time in Berlin, where he met Carol Holloway, who had also found her way to fine art in stages. She’d begun her working life in a clothing store in Manchester, and left that to settle first in Paris and then to study in Berlin. They had a child and moved to Wales, hoping to make a living on their work. A tip-off that Limerick’s art school was looking for a printmaker prompted their next move. They found a small house in the woodlands at Curraghchase and, starting from scratch Blodau, then as ever a man of quiet but considerable energy, took on the challenge of setting up a print department in the art school.

Idealists, they nurtured the dream of starting a kind of alternative art school and took on another, bigger challenge, acquiring the substantial, deserted Abbey House in Rathkeale. The plan as envisaged did not materialise but the house became a cultural hub, hosting summer schools, theatrical productions and serving as a stimulating, creative environment for many. With a mind to providing facilities for graduates, Blodau established Limerick Printmakers, a bastion for artists in the city ever since. He was also one of the founders of EVA, which has developed to become Ireland’s premier international exhibition of contemporary art. Incidentally reviving Limerick’s leftist heritage, he fostered cultural links with Eastern Germany, the USSR and Cuba.

It would be wrong to separate these several areas of teaching and organisational activities from the work he made in the studio. Life and work are as one. Coming of age in postwar Germany clearly shaped his conviction that art should be a force for good in the social and political arena. Printmaking is relatively egalitarian and accessible by comparison with other art forms, but Blodau never propagandized or preached. Equally, it would be wrong to overly emphasise divisions in his work in terms of differences in subject matter, specifically in distinguishing between some gritty urban scenes and the more obviously lyrical landscapes and plant pieces.

As an artist, Blodau first gained notice in Ireland with his studies of commercial facades on the streets of Limerick, small shop-fronts embellished with traditional sign-writing. He went on to make more expansive accounts of Limerick’s neglected Georgian precinct. The shop-fronts are impassively documented, but there is a dark, moody edge to the images that is more fully articulated in the streetscapes. Germany’s urban fabric and infrastructure had been scarred and often ruined in the course of a disastrous war, but a comprehensive programme of regeneration and modernisation began around 1948. Blodau found a different kind of ruin in Limerick: the buildings weren’t shattered by bombs, but they were worn down by time and an obvious lack of care and attention. While they are really beautiful in a melancholy way, his urban landscapes of Limerick unmistakably suggest stagnation and poverty. Compositions based on a Travellers’ encampment in an urban wasteland are outstanding.

Human figures are scarce in the Limerick work, though the Dunnes Stores strikers, protesting against apartheid in South Africa, are represented. Figures remain scarce in watercolours and etchings recording a trip to Cuba, even though the climate and the mood brighten immeasurably, and there is a distinct feeling of conviviality and community in colourful, informal studies of Havana and other locations. Lithographs of Trinidad (the town in Cuba, not the island) and Remedios are particularly striking.

Blodau’s instinctive affinity for landscape, and for plant-life in his own greenhouse and garden, comes across in some of his finest work, sweeping views of Co Clare that are acutely sensitive to the movement of air, light and cloud over the land, and close-up accounts of the vibrant energy of agapanthus, lilies and other plants in the rich, humid greenhouse atmosphere. His openness and humanism are as apparent in these intimate watercolours as in the more expansive, dark-hued views of wintry Limerick streets.

Dietrich Blodau: A Life of Observations is at The Hunt Museum, Custom House, Rutland St, Limerick, until January 14 huntmuseum.com

Say ‘whistleblower’ and the Irish hear ‘informant’ or ‘snitch’
3

Eugène Delacroix: Reflections on a revolution in art
7

Henri Cartier-Bresson: a perfect alignment of the head, heart and eye
8