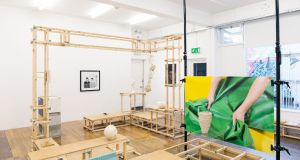 Once a storage centre for vast supplies of imported animal feed ingredients, the R&H Hall building was the centerpiece of the North Quay industrial complex in Waterford city. Once its demolition was confirmed a few years back, Keith Currams started to document the process. Love it or hate it – and opinions were polarised – François Hennebique’s concrete monolith was of architectural note, and Currams’s photographs and audio installation (including first-hand accounts of the building – stories of storeys) comprise an elegiac memorial to part of Waterford’s historical industrial fabric.

Yohji Yamamoto’s 1998 fashion campaign was based in Connemara, drawing fabrics, colours, patterns and models from the local environment.

That’s one dramatic example of an underlying sympathy between aspects of Japanese and Irish aesthetics. This show, initiated last year at the National Craft Gallery to mark 60 years of diplomatic links, juxtaposes Japanese and Irish women’s wear and accessories to highlight links and divergences. Curated by Gemma A. Williams, in collaboration with Roji.

It’s not an obvious pairing, but Limerick City Gallery acted at matchmaker and now Uillinn gives the juxtaposition another outing.

Both artists make abstract paintings displaying sharply defined areas of flat colour, more or less, but with noticeably different temperaments. For all the precision of the boundaries in his spare, centre-focused compositions, Gorman is un-emphatic and easy-going.

Walsh is much more definite, more directed towards pinning things down. His precision has a cross-hair at its centre.