Art in focus: Storm at the Mouth of the Grand Canal, Venice by JMW Turner 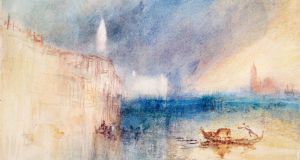 Joseph Mallord William Turner’s (1775-1851) Storm at the Mouth of the Grand Canal, Venice, c. 1840, part of the Good Morning Mr Turner exhibition at the National Gallery of Ireland which run from January 1st-31st

Storm at the Mouth of the Grand Canal, Venice, circa 1840, is a watercolour by Joseph Mallord William Turner (1775-1851). From the right foreground, a gondolier guides his craft towards the shore as the sky darkens and a storm threatens to engulf the city. The location and specific architectural features are quite recognisable, but the treatment is impressionistic to an extreme. It’s as if La Serenissima, the city miraculously built on the water, is being reclaimed by the elements.

Turner was a passionate observer of nature at first hand and he continually made studies on the spot, in sketchbooks. His sensitivity to atmospheric effects was acute to the point of obsession, and the immediacy of watercolour suited him to perfection. The famous story that he had himself tied to the mast of a ship to more accurately capture the experience of a storm is probably apocryphal, but he certainly went to considerable lengths to record appearances accurately.

Every January, a collection of Turner’s watercolours are exhibited at the National Gallery of Ireland, 31 of them bequeathed by collector and benefactor Henry Vaughan (1809-1899). He stipulated that they should only be displayed in January, when light levels were low, to protect them. Now, conservation-friendly lighting in the print gallery would allow longer exposure, but the rule is still honoured.

This year, Kerry-based printmaker Niall Naessens has been invited to respond to Turner’s watercolours with etchings and drawings. His meticulous accounts of the magnificent land and seascape around his studio are notable for the appearance of “contemporary and mundane aspects of today’s world, including electricity transformers and agricultural equipment such as muck-spreaders and tractors”. (Good Morning Mister Turner: Niall Naessens & JMW Turner, Print Gallery, National Gallery of Ireland, Merrion Square, Dublin, from January 1st-31st)

In its grand sweep and audacious reliance on atmosphere, it is typical. Turner first visited Italy when he was 44, travelling via France and after many stops along the way, eventually reached Venice. Rome was a more predictable destination, but Turner was drawn to Venice, inspired by artistic precursors and writers. He wasn’t disappointed. In time it provided him with subject matter for about 170 watercolours. He was given to setting off quietly on painting expeditions and he may have revisited Venice without informing anyone, but of his three documented visits, the last was in 1840.

By then the topographical solidity of his earlier work had long evaporated in atmospheric swathes of watery light. Profiled by a storm cloud, the buildings along the left, towards San Marco and beyond, with San Giorgio Maggiore distant on the right, are indicated with the lightest of touches.

Over 25 years previously, William Hazlitt had woundingly dismissed Turner’s paintings as “pictures of nothing, and very like”, which did not put him off his stride. He went on to create works so minimal in form and veering so close to abstraction that many were not appreciated until developments in late 19th and 20th century art caught up with him. Even today, his more extreme works can perplex many viewers.