Rodney Graham: That’s him in the picture 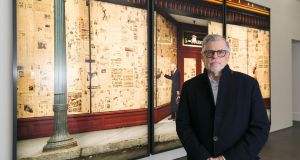 The Irish Museum of Modern Art has previously held exhibitions by Jeff Wall and Stan Douglas, two of the foremost figures to emerge from what became known as the Vancouver School of conceptual photography in the 1980s.

Wall and Douglas share a basic conviction that the photographic image, and indeed instances of practically every other form of media from books to songs, films to television news programmes, are culturally determined constructs. Both artists make elaborately staged photographic tableaux that are on the scale of epic history paintings or cinematic projections. They aim to elucidate the myriad cultural and political underpinnings of the images and ideas we habitually consume, and often refer back to art history or popular media sources. Wall has stuck to photography, whereas Douglas has also worked with film and performance.

Now another artist associated with the Vancouver School, Rodney Graham, is showing at Imma in That’s Not Me. The title is a typical pun, because the person we see most in his work is him. He is unmistakably affiliated to his contemporaries.

There are overlaps in methodology and interests, all the more obviously so given that he is an obsessively referential artist. Practically everything he does refers directly to a source text or work and features a Chinese box-like structure of references within references.

With his teacher, Ian Wallace, and Wall, he was a member of the punk band U-J3RK5. He still produces music but regards it as quite distinct from his visual art. Made with a camera obscura, an inverted photograph of a tree – a reference to the fact that, optically, the world is upside-down until the brain adjusts the picture – established him as an artist and signalled the way his mind works. He went on to make very involved text-based conceptual pieces (to the extent of writing a novel) before finding his way back to film and, more recently, large-scale, staged photographic lightboxes.

He is undoubtedly best known for one film, made in 1997. Vexation Island is a relatively simple, looped narrative – he loves cyclical structures – in which a castaway (Graham), under a coconut tree repeatedly wakes up, shakes the tree and knocks himself out with a falling coconut.

Though it is not included in the Imma show, it was a hit (so to speak) at the Venice Biennale in 1997. Its deadpan humour, not all that far removed from an insistent, irritating literalness, is characteristic.

An earlier film, not that dissimilar in many ways, is at Imma. Halcion Sleep (1994), signalled the arrival of the artist as a performer in his own work, something that has continued ever since. We see him sleeping, stretched out on the back seat of a car as it travels through Vancouver at night.

His journey began in a suburban motel, where he took a dose of sleeping pills, the Halcion of the title, from where he was transported back to his city-centre home, asleep (in the event, he edited out the set-up and the conclusion). He had in mind the reversal of an archetypal plot device in thrillers: a protagonist is drugged and abducted, groggily waking up in strange surroundings.

Halcion Sleep is strangely, ambiguously atmospheric: it’s hard to decide if it’s peaceful or troubling, an effect enhanced by Graham’s decision not to show us the beginning and end of the process.

His range is indicated by another, rather beautiful film projected at the end of the corridor. Torqued Chandelier Release, made in 2005, has two main sources: Isaac Newton’s rotational motion experiment with a rope and a bucket of water being one, and a scene from the 1952 period romantic, sword-fighting film Scaramouche, in which the title character is nearly impaled by a falling chandelier, being the other.

Graham twisted a rope from which a crystal chandelier was suspended and filmed it revolving as the rope unwinds, then winds a little in the other direction, and so on. It distinctly recalls the tone of conceptual film works from the late 1960s and 1970s.

To say that he filmed it is probably an overstatement. As he has pointed out, he doesn’t even own a camera and usually employs people to do the photographic work. He prepares the settings and plays a role. That’s the methodology for the lightboxes, many of which are on view. The source can be a painting – not necessarily a good painting – or a chance event.

The Avid Reader stems from the latter, a scene glimpsed in the street. A three-part lightbox, cinematic in scale, it features a man reading the pages of newspaper used to line the windows of a closed Woolworths store, while a woman walks by the façade. He plays the role of the man, and his wife, Shannon Oksanen, herself an artist, is the woman strolling by.

It has the enlarged hyper-reality of cinema, with everything illuminated, almost glowing, and precisely focused. We are looking at a set, constructed in Graham’s studio. It is, he says, a recreation of a 1949 storefront, and the papers the man is studying date from 1945, following the end of the second World War. Incidentally, there is an echo here of the work of Douglas, who is fascinated by the prewar and postwar era in Canada.

Despite the historical precision of his image, though, Graham does not seem to share Douglas’s interest with how issues of race and class are built into the structure of a society.

Does that make him a more superficial artist? Not necessarily, though the imposing physical scale of many of the lightboxes does seem at variance with their often slight import. But then, that could be part of the joke, and there is plenty to occupy the eye and the mind in a show of several genuine highlights.