The Irish artist who captured the image of Che Guevara 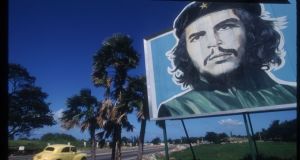 PROFILE: JIM FITZPATRICK:Why has it taken Jim Fitzpatrick, best known for his intricate illustrations of Celtic mythology, 42 years to seek copyright of his most famous work, the iconic poster of Che Guevara?

Now, the artist is fighting to win the copyright he hadn’t wanted more than four decades ago – but it’s actually a little more complicated than that. The drive to gain copyright began in 2004, when Fitzpatrick decided that he wanted to give the royalties from one of the world’s most reproduced images to Cuba. Initially he wanted to donate to their hospitals, but then he realised that Cuban hospitals are so advanced that they could be teaching the Irish a thing or two. But he still wanted to make the gesture, so instead he will give the money to Guevara’s widow, Aleida, and to the Cuban people. “It’s not charity, it’s solidarity,” he says.

So, if it all started in 2004, why is it suddenly all over the news now? A cynic might guess it’s because, for the past two years, barrister and Fianna Fáil TD Michael Mulcahy has been helping with the cause and, for a TD seeking re-election, no good deed should go unpublicised? But the cynic would be wrong. The timing is actually down to the forthcoming launch of a limited-edition print of Fitzpatrick’s Guevara, to raise funds for Cuba and the Cuban Solidarity campaign.

And it’s hard to be cynical around Fitzpatrick, because he’s such a genuinely nice man. He gets angry about the current situation in Ireland, and furious that “we’ve been saddled with gamblers’ debts”. With strong revolutionary tendencies, he hopes that one day the Che Guevara image might be carried in a mass demonstration in Dublin.

Born in Dublin 65 years ago, Fitzpatrick’s father left home, and the family was forced to sell their house in Skerries and go to live with relatives. Their new home was damp, which led to the 10-year-old Fitzpatrick contracting pleurisy and spending nearly two years in a sanatorium. Confined to bed, he read and drew, and listened to tales from his mother and great-aunt of the Tuatha de Danann, Cú Chulainn and Fionn MacCumhaill.

Art was in his background: his grandfather Thomas Fitzpatrick was a lithographic artist who ended up working for Punchmagazine in London, and his father, Jimmy Fitzpatrick, was a photo-journalist for the Irish Independentand The Irish Times. “Art is in the blood,” said his great-aunt, who he called Granny, “and you have the fever of it.”

A life-defining trip to Newgrange, back when you could wander in to the passage grave alone, candle in hand, led to pages and pages of the Celtic illustrations for which he is also famous.

His mother sent him to continue his recuperation in Co Clare. But later, Fitzpatrick recalls coughing over a drawing he was working on. “This ended with great globules of blood covering the board and my masterpiece! I was so disappointed to see it ruined but my aunt’s reaction was even more dramatic.” He was rushed to hospital and diagnosed with TB. Nursed back to health by “strong women”, he began to see a connection between Irish women and the figures he was obsessed with from Celtic mythology. “These goddesses are alive and well, and walking the streets of Dublin.”

His friendship with Phil Lynott also makes sense of his work making the iconic Thin Lizzy album covers. But what about Che Guevara? Fitzpatrick, believe it or not, met Guevara in a bar in Kilkee back in 1962. The artist had a summer job, and Guevara’s flight was fog-bound in Shannon.

“I recognised him immediately,” he has said. “I was only about 16; I wasn’t expecting to speak with Che Guevara. I asked him vaguely about his roots, because he told me his granny was Irish. His great-granny, Isabel, was from Galway, but he told me his ancestors were from Cork. I am pretty sure that’s what he said.”

Later, when Guevara was killed in Bolivia, Fitzpatrick came across a photo that Korda, Fidel Castro’s “official” photographer, had taken of him. Using a process known as “line drop”, he outlined Guevara in black, and put the image onto a red ground. The yellow star he coloured in with a felt-tipped pen. Fitzpatrick never wanted money for the poster, which he distributed through a network of friends around the world. “It would be like taking blood money. I just wanted to make sure he was not forgotten.”

Korda didn’t get copyright at the time either, as Castro didn’t believe in it. But now, with Korda dead, and his heirs asserting their rights, Fitzpatrick has realised it’s time to make sure that Cubans benefit from the image of their iconic hero.

So that’s why a seven-year-old campaign, based on a 42-year-old image, is “suddenly” in the news. And with the image appearing on everything from T-shirts to cigarette boxes, posters to tea towels, Fitzpatrick’s legacy could continue long into the future.

Who is he?Irish artist and creator of the iconic Che Guevara image.

Why is he in the news?He’s fighting to win the image copyright, 42 years on.

Most appealing characteristic: Smart, charming, funny . . . where do you start?

Least appealing characteristic:Too many to count – if you’re a right-wing capitalist.

Most likely to say:“Viva la revolución!”

Least likely to say:“The financial markets will sort everything out.”

A limited edition print of the Che Guevara poster will go on sale on March 7th, priced €495. See the Jim Fitzpatrick Gallery on Facebook.

Actress by Anne Enright: a writer performing at the peak of her powers
Real news has value SUBSCRIBE