The National Gallery of Ireland has launched its upcoming exhibitions programme running from Autumn 2017 to Spring 2019. Video: Bryan O’Brien 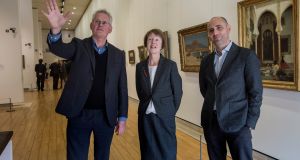 Sean Rainbird, left, director of the National Gallery of Ireland with curators Maire Bourke and Brendan Rooney at the announcement of upcoming exhibitions. Photograph: Brenda Fitzsimons

The refurbished National Gallery has surpassed attendance targets since it reopened earlier this year, its director, Sean Rainbird, said at the launch of the gallery’s programme of exhibitions between now and spring 2019.

The Dargan and Milltown wings of the gallery were officially reopened in June following a six-year-long multimillion-euro refurbishment project. “Inevitably if you’ve got more space back you do more things,” said Mr Rainbird. “We’re adapting to an organisation which has grown by 40 or 50 per cent. We’ve grown as an institution. There’s been a firing up of the energies.”

While the gallery was projected to have around 825,000 visitors this year following the official reopening, the actual number looks set to be comfortably over a million by the end of December. “We planned quite cautiously because it’s important not to overshoot,” said Mr Rainbird. “But on the other hand we didn’t know how much we should charge for an exhibition. These were the nitty-gritty questions we have had to answer through the year.”

More than 100,000 tickets were sold for Vermeer and the Masters of Genre Painting, which ran for three months this summer.

“We ensured deliberately that we didn’t stuff it full of people,” said Mr Rainbird. “We’ve all been to these dreadful blockbusters where you can only see over the heads of six people. It’s very stuffy and not a nice experience at all. You could say we’ve foregone a little bit of income by doing so, but the most important thing is to allow people to admire the work.”

The gallery’s next exhibition, opening on October 25th, showcases the art of Frederic William Burton, the Clare-born painter who was director for 20 years of the National Gallery in London. Burton’s 1864 work, The Meeting on the Turret Stairs was voted Ireland’s favourite painting by the public in 2012.

Next summer, Circus 250 will commemorate the 250th anniversary of the first circus through works of art and archive material focusing on the circus and performing arts. To coincide with the centenary of the formation of the first Dáil, an exhibition will explore aspects of Countess Markiewicz’s complex identity through visual portrayals of her in painting, photography, illustration and film.

Canaletto and the Art of Venice, running from December 2018 to March 2019, will present a selection of some of the finest 18th century Venetian works from the UK’s Royal Collection. “They’re really quite rare,” said Mr Rainbird. “It’s not only the 60 paintings; it’s the hundreds of works on paper and also the work of his colleagues and contemporaries.

Mr Rainbird expressed his hope that the Government would provide funding for the next phase of its refurbishment, which knits together the Millennium wing on South Leinster Street with the Dargan and Milltown wings on Merrion Square, and addresses serious inadequacies in the current library and conservation spaces. “We really have to create a long-term solution,” he said. “I think we’ll know within the next few weeks or months which way this is going,”