Art highlights of the week

From particular ocean views to exaggerating in the interests of truth 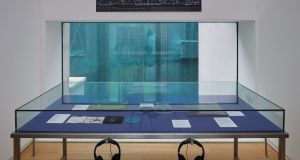 The Ocean After Nature Group exhibition. Dublin City Gallery, (Gallery closed December 24-27) hughlane.ie Some 20 artists and collectives on the oceans today, as questions about the impact of the global economy, climate change, the fishing industry, pollution and other negative factors become increasingly urgent. Alaina Claire Feldman curated for Independent Curators International. Irish artists Elaine Byrne and Philip Napier feature among the 20. Among those from elsewhere are Yonatan Cohen & Raffia Segal, Renée Green, Peter Hutton, Diamantes Narkevicius and other individuals and collaboratives.

The Freud Project The Garden Galleries, Irish Museum of Modern Art, Royal Hospital, Kilmainham, Dublin Until January 7 (Gallery closed December 24-27) imma.ie IMMA has 50 Lucian Freud works on loan until 2021. There is a charge of €8 concessions €5 but free on Tuesdays and with various other exemptions. If you have yet to visit, you have until January 7, when the current arrangement of works will be changed to incorporate a more focused look at Freud through others’ eyes as well as his own. There’s a hint that all 50 pieces will not be on view as they are now, carefully and spaciously hung in sympathetically scaled rooms. It is a premium exhibition with many memorable pieces, not least a series of etchings, as well as great paintings of people close to him.

What’s the Story? Crawford Art Gallery, Emmet Place, Cork Until January 20 (Closed December 25-27 and January 1) crawfordartgallery.ie History, Memory, and Myth in an Age of Alternative Facts is the subtitle, and Michael Waldron curated. The title comes from a familiar Irish greeting, but what is the story in a post-truth world when politicians can make it up as they go along with no repercussions. In selecting works by various Irish artists over the centuries, Waldron suggests that visual art can offer insight into underlying truths beyond appearances, and encourage critical engagement with what we see and hear. As Matisse put it: “I exaggerate, but only in the direction of truth.”

Known Unknowns Limerick City Gallery of Art, Carnegie Building, Pery Square, Limerick Until 14th January (Closed December 24-27 and January 1) gallery.limerick.ie It’s 80 years since Limerick began a municipal art collection, initially shown in the Savoy Cinema as a prelude to establishing an municipal gallery. LCGA’s Shinnors Scholar (2015-17), Simon Fennessy Corcoran set about curating an active engagement with the collection as it stands now, inviting three artists, Artists Damien Flood, Nuala O’Sullivan and Daniel Greaney, to respond to the collection in any way they choose, creating new work as a means of response to it. It’s the collection, but not as we know it.