Also, Art@Work in Galway and The Breath from Fertile Grounds 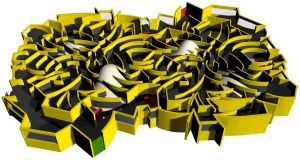 Shonky: The Aesthetic of Awkwardness

John Walter curates an exhibition of work by artists and architects to map out the nature of “visual awkwardness”. The title derives from a slang term for  “corrupt or bent, shoddy or unreliable”, which seems to stretch the concept of awkwardness. It is a consciously lo-fi, hand-made look, something that militates against the robotized, sleek, slick look of so much contemporary culture. By going against the grain, he argues, artists can better deal with issues including “gender, identity, beauty and the body.”

Galway University Hospitals Art Trust runs an ambitious programme that places art in the hospital as a means of enhancing an environment associated with stress and anxiety. Apart from bringing in artists and artworks, the trust encourages immediate involvement and Art@Work is the annual exhibition of work by members of staff at the hospitals.

The Breath From Fertile Grounds

An installation by Nigerian-born, Belgium-based artist Otobong Nkanga, whose work has featured in EVA 2016, curated by Koyo Kouoh. Ms Nkanga set out to make “a space of remains and revitalisation”, making a “collage of elements spread across the gallery”, plus a wall drawing and a sculptural element. Her written commentaries, together with those of Doireann Ní Ghríofa, look to the possibility of “multiple narratives, time frames and languages.”

Part of IMMA’s curatorial series Then and Now, which encourages artists to position early work in the midst of what they are doing now. Consistently experimental in testing what painting might or could be, Lennon simultaneously includes old and new in the form of Folded/Unfolded MM 1972 (for Fiona), 2017. It is a work first seen in the artist’s solo show at Project in 1972 and remade for this iteration of the process.

Britain and Europe in a Troubled World: A wise guide to Brexit
10