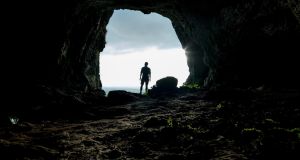 Entirely Hollow Aside from the Dark – Alan James Burns

Don’t be afraid of the dark in Co Sligo as Alan James Burns kicks off his mini tour of the caves of Ireland. In an event made in collaboration with Sue Rainsford and Ian Dunphy, you’ll find yourself led under the earth and, as darkness descends, begin to hear voices. Sounds shift around as you’re treated to the inner thoughts of a woman wondering about reality and questioning her memories. Entirely Hollow is in Sligo as part of the Tread Softly Festival. It then moves on to Lickhill Cave, Skibbereen in August; then Aillwee Cave, Co Clare; Smuggler’s Cave, Portrane and winds up in Pollangollum Cave, Enniskillen at the end of September. Free but ticketed.

Since Nick Miller won the inaugural Hennessy Portrait Prize in 2014, he has been turning his attention to a different kind of subject. Partly in response to a residency with Sligo’s North West Hospice, and partly due to time spent with his mother during her terminal illness, Miller has been painting still lifes of flowers. Miller describes these images, thickly painted in oil on linen, as a way of “seeing the fullness of life before it passes”. The Financial Times raved about them when they were shown in London: “ravishing, exquisitely delineated . . .” Capturing blackthorn, elderflower, honeysuckle and hazel in all their exuberance, forever alive in paint, these are plants with personality, portraits to glory in.

If you find the work of Isabel Nolan strange, it’s possibly because she means it to be that way. “Just because the universe is probably real it doesn’t mean it’s not weird or puzzling to be here,” the artist says. Sculptures, paintings, drawings, photographs and a rug spread out, and are suspended in the gallery as Nolan gets to grips with matters of life and death. Don’t expect an easy explanation – her cast of characters range from philosopher and activist Simone Weil to fictional mob boss Tony Soprano – but instead give yourself up to the adventure of looking, and occasionally getting a fleeting burst of insight into existence.

Artistic inspiration can come from some surprising places. Herding together ideas and images drawn from the world of sheep farming, Orla Barry’s Breaking Rainbows – originally seen at last year’s Dublin Theatre Festival – now comes to Cork. Ewe can expect a flock of eclectic ephemera, a 300kg mound of sheep’s wool, and a video that grazes on fodder from the gap between nature and culture, to ancient ritual, to our current consumer society. Barry herself divides her time between an international art career based in Brussels, and running a flock of pedigree Lleyn sheep in Co Wexford. By turns witty, wise, surreal, intriguing and strange; ramming the sheep thrills home.

Like Christmas, but with better weather, summer heralds a series of group shows around the country, and while they tend to be less satisfying than an exhibition where one or two artists get to fully explore a theme or idea, it’s always a pleasure to see a nice array of work. The Solomon’s is a favourite, and with prices from €135, for a screen print by Bernadette Madden, you can get lost in some surprisingly affordable art dreams. Tom Climent is there, alongside Orla de Brí, Joby Hickey, John Short and Cléa van der Grijn, and I’m enjoying Vida Pain’s hyper-real yet strangely sparse urban landscapes, Austin Hearne’s floral prints on painted wallpaper, and Bridget Flinn’s dreamy country scenes. Happy art shopping, everyone.