Fancy breaking up a building replica made from 1.5 tonnes of cardboard? 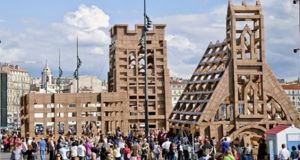 An example of a previous work done by Olivier Grossetete

A French artist is calling on the Galway public to help him break up a cardboard replica of NUI Galway’s Aula Maxima, or Great Hall, in Eyre Square on Sunday.

Olivier Grossetete interprets the collective human urge to create and destroy, and his cardboard “Aula” was constructed with public participation on Saturday at the top of the square as part of Galway’s International Arts Festival (GIAF).

It took three trucks to transport some 1.5 tonnes of cardboard building blocks, put together in the university last week. The hall was then built from the ground up during sunshine throughout Saturday.

Today’s demolition takes place at 4pm in Eyre Square, and the 1.5 tonnes of cardboard and masking tape will be taken away by Walsh Waste and Recycling.

Grossetete, a graduate of the Valence School of Fine Arts, has travelled the world with his cardboard architecture projects, ranging from Roman aqueducts to neoclassical halls to an “ephemeral city” of seven buildings that was a highlight of last year’s Sydney Festival in Australia.

He told the Sydney Morning Herald it could be difficult to persuade people to destroy “the beauty they have wrought”.

“I have to go first, to encourage them . . . it’s really tiring jumping on cardboard,” he told the newspaper.

The 40th GIAF continues for a second week, with over 200 events ranging from theatre to music to visual art and talks. Organisers anticipate attendance will break the 200,000 barrier and that they will meet last year’s economic impact, cited at €23.5 million.

Among a series of events running to July 30th, Galway-based writers Seamus Scanlon, Aoibheann McCann, Órlaith Foyle and Kernan Andrews will read their crime and noir fiction-based poems at the Galway Mechanics Institute on Middle Street on Tuesday.