The best art shows to catch this weekend 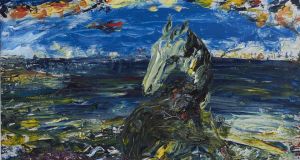 Jack B Yeats, ‘From Portacloy to Rathlin O’Beirne’, at the Hunt Museum in Limerick

The newly refurbished National Gallery is being welcomed with love and acclaim. Given that it also reopened with an epic Vermeer exhibition, you’d almost wonder what more they needed to do to win our hearts and minds. Welcome to Ealaín, a day-long celebration of art and culture, with special guests Lisa Lambe, plus Liam Ó Maonlaí and Peter O’Toole from Hothouse Flowers. Add in children’s workshops, basket-making with Joe Hogan, and biscuit-making with Michelle Darmody, and it’s measuring up to be a delicious day. Oh, and there are tours of the collection too, of course. Admission free.

A pleasingly disturbing annual highlight of the Galway International Arts Festival has become Enda Walsh’s series of rooms. The first, Room 303, invited you to sit on a bed in what looked like a grotty boarding-house, and intrude on the innermost thoughts of a travelling salesman coming to the end of his days. A Girl’s Bedroom, and Kitchen, followed, so, with this year’s Bathroom, you can tell he’s ultimately going for the full house. Each room has been an intimate experience – you go in, just a few at a time, and wait for the lights to dim and the voices begin. It’s approximately 15 minutes of art-meets-theatre that’s guaranteed to stay with you long after you emerge blinking into the light. Admission €7.

We can come to see what landscapes look like through the work of our most talented artists. Monet, for example, made it hard to imagine waterlilies any other way, while Van Gogh did the same for starry nights and cornfields. Now, the Hunt Museum has brought the landscape of Ireland home with a landmark exhibition of the work of two Irish giants, Jack B Yeats and Paul Henry. The pair were contemporaries – they died within a year of one another – but their art outlook couldn’t have been more different. While Henry perfectly captures the misty vistas of the West, Yeats gets gritty with horse races, crowds and mythic figures.

Forty years ago, the Voyager spacecrafts (there were two of them) left earth, bound for distant stars. Leaving our own solar system in 2013, it’s estimated it will be 40,000 years before they make it to their next potential landfall. These galactic explorers carried “Golden Records”, which included sounds: ocean waves, people kissing, Beethoven and Chuck Berry. Apparently The Beatles said no, for “licensing reasons” – imagining aliens infringing their copyright, perhaps? There were also encoded images, of joyful people (there was no space for gloom or discontent in the way we wanted aliens to see us), landscapes and mathematical equations. To celebrate the anniversary, artists including Dorothy Cross, Lucy McKenna, Paul Nugent and Jennifer Walshe have been invited to show work that might just communicate how we see ourselves today. Intriguing fun.

The question of why artists bother to paint representational works when you could just take a photograph is old and tired at this stage, but if you’re still looking for answers, head to Kathy Tynan’s current show to see just how satisfying the injection of a different vision is to the everyday. With subjects ranging from laptop computers, to dogs and cats, to spring blossoms, to a patch of weeds against an orange-red sky, expect a series of insights into those moments that can evaporate into half-caught memories or moods – unless we pay proper attention to them. It’s seriously strong painting, too.

The cross and the dragon: the pagan roots of Irish crosses
Real news has value SUBSCRIBE