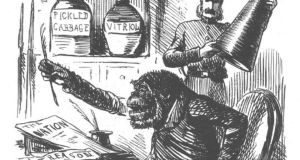 In the fallout from the recent Conservative party and DUP deal, Northern Ireland has enjoyed a rare trip back to the British headlines.

The redheaded stepchild of British politics doesn’t generally get much press these days, but the prize of 10 seats from its largest party was enough to make the papers newly inquisitive and send the British government into flattery mode. So, for a fortnight, we watched as the Tories dripped honey upon their strange new pals, casting themselves as winking prospectors in snakeskin boots, talking some shoeless hillbillies into selling the scrubland over a gold mine.

The problem with Britain’s prior antipathy to Northern Irish issues is that certain political realities that have been present in the UK for decades will be strangely unfamiliar to the public. Nowhere was this more risibly apparent than in the numerous bullet point-studded DUP fact sheets hastily generated by British broadsheets, which profiled the party – a 46-year veteran of British politics – as if it had just landed from the outer reaches of interstellar space (no doubt its journey took it through several of the solar system’s more traditionally Catholic areas en route).

It was also time for political cartoonists to sharpen their nibs and target some unfamiliar quarry. And it was here that the Daily Mail’s Mac received more than a little opprobrium for his approach to the situation.

One cartoon depicts a supposed Belfast pub, filled with drinkers passed out on the floor, and a sign on the bar saying: “Free Guinness for life!” The caption, a quote from the fictional barman, is “Theresa May took some persuading but eventually the DUP clinched the deal”.

There are a few problems with his cartoon. The first is the staggering racism involved in invoking the drunken Irish stereotype on any pretext. Secondly, the DUP’s evangelical bent means many party big-wigs are entirely teetotal. Furthermore, even those DUP diehards who don’t ascribe to abstinence would sooner drink holy water than Guinness. Despite its solid Protestant, unionist heritage, it is synonymous with Dublin, and therefore not a big hit with the east Belfast set.

The artist in question, Stuart “Mac” McMurtry, is not a newcomer to startling bigotry. He’s been at the coalface of bewildering racism for some time. He has infamously depicted Syrian refugees as rats, leading to many comparisons with Nazi propaganda. It’s of course inaccurate to compare Mac to Hitler: Hitler could draw.

In one of his more extravagant offerings, Mac commemorated the death of TV icon Cilla Black by depicting her path to heaven as being blocked by illegal immigrants crowding the pearly gates, and compared drowning migrants to monkeys.

Mac in Daily Mail wrong on so many levels: Racial stereotyping; the DUP are teetotalers; if they drank, it wouldn't be stuff made in Dublin pic.twitter.com/BCzDg3bOLv

Planet of the apes

In a way, representations of the Irish long ago worked as a template for this kind of hatred, and the Daily Mail could be merely returning to a legacy of dehumanising the papist rabble as feckless apes. At this juncture, a mention of Punch’s work in the mid-19th century is boringly predictable, but a man can only fit so many ideas in his giant, sloping, hairy forehead – as depicted in its caricature of the “Fenian Guy Fawkes” .

The old Irish caricatures of witless, heavy-browed thugs, sporting ill-fitting waistcoats and squat little tobacco pipes, are so famous as to have become neutered by overfamiliarity. They are cultural oddities you might now see displayed in Irish pubs as acts of ironic defiance. Despite this, however, more than a century and a half later, some still retain a poisonous sting.

Take, for example, the Punch cartoon that depicted the Young Ireland Party as a gorilla. It’s clearly horrifying that Irish intellectuals and lawmakers were routinely cast as apes, but the smaller details stand out. It’s perhaps the petty spite of including a jar marked “Pickled cabbage” behind “Mr G O’Rilla” that makes the jaw drop further still.

Closer to the modern era, the Daily Express’s Arthur Stuart Michael Cummings – a man so right-wing, he made Genghis Khan look like a social worker – was just as liable to reflect Northern Irish citizenry as apelike in bearing. The ordinary British soldier was merely a kindly, put-upon peacemaker, a saintly neutral bound by Christian spirit to hold the two warring gangs apart, lest they hurt themselves.

Later, the same “puzzled spectator” trope would be trod out by the Evening Standard’s Jak, painting the various sides of the internecine spats of the Troubles as literal monsters.

Perhaps as Northern Irish citizens, we should be wary of criticising topical paintings, lest our opponents mention the ones found in our neck of the woods: crudely rendered murals of republican heroes squinting beside Nelson Mandela; or wonky, heavy metal skeletons parading their tattered, yet proud, union flags across battlefields. More curious still, we don’t just plop these works in the funny pages but, with a showy kind of masochism, paint them 20ft-tall on the sides of our own homes.

Murals themselves have been prominently featured by many cartoonists, offering artists the chance to do some art within their art, leading to some stirring and thoughtful work by artists such as Morten Morland and Steve Bell.

But even there, some avoid the tricky business of being particularly artful or worthy and instead use the mural as a vehicle to depict an otherwise unremarkable scene, in the hopes that its placement on a wall will do the in-between work for the reader, such as Blower’s recent effort in the Telegraph. It shows a mural of a big DUP man accepting a big bag of cash from a tiny Theresa May. A keen-eyed observer will see the labelled boxes of Champagne being loaded out of a car. Northern Irish politics is so little understood, you see, that the need of textual support for the reader is genuinely great.

Where else but in the grisly, gore-splattered abyss that is local politics could you chance upon such visual aides as a hoisted flag labelled “Fiscal unity” or a soup tureen inscribed “Corporate tax setting powers”? Where else would you find the blood-soaked hand of Bernadette Devlin marked “Irresponsibility”, as in the staggeringly offensive case by the Daily Mail’s Emmwood immediately after the Bloody Sunday massacre.

Labels are important and, in political cartooning, some artists live or die by those things they don’t mind spelling out to their audience. F Scott Fitzgerald once said that ending a sentence with an exclamation mark is just laughing at your own joke. I’d go further and say that pinning labels all over your cartoon is like recording your own laughter, playing it back, and transcribing each “ha” in the margins.

So, when Cummings wanted to depict a Sinn Féin degenerate among his cabal of Loony Left forces bearing down on his enemies, he felt the need to write “Back Sinn Féin” across the odd little onesie he had him wear, just for the avoidance of all doubt. When taken with the general frenzy of additional text in this astonishing roll call of things the artist hated – blacks, gays, upside-down communists – it rather suggests a lack of faith in one’s talents for visual storytelling.

Toward the middle of that signage spectrum sits the Telegraph’s Matt, for whom planet Earth can often seem little more than a maddening labyrinth of sandwich boards and placards. Witness how, with just a few strokes of his pen, he can conjure the unmistakable ambience of a pub in Ireland’s capital, as two drinkers discuss how “far fewer Americans claim to be Irish these days”.

In truth, Matt’s bitesize nuggets of inoffensiveness are a necessary palate cleanser against the tide of hatred, drudgery and logorrhoea one encounters when considering British cartoonists’ visions of Ireland. So, we’ll end on his take on this week’s events, perfectly ensconced within the gentle, soothing “this thing plus that thing” niche he has so artfully carved out for himself. A picture so bland, so limply unproblematic that, like all the best visual art, you simply couldn’t write it.

It depicts a bowler hat atop Big Ben. With the caption: “The DUP insisted.”