The best art exhibitions to catch this weekend

Welcome to the Neighbourhood in Askeaton; the Galway International Arts Festival and more 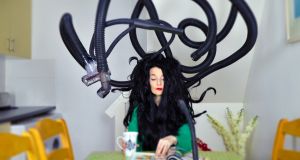 Aideen Barry, still from Not to Be Known, at Crawford Cork

Welcome to the Neighbourhood
Askeaton Civic Trust, Askeaton, Co Limerick July 15th askeatonarts.com
For just over a decade, Askeaton Contemporary Arts have been turning the small North Limerick town into one big art gallery – some might say “art laboratory” – during their annual Welcome to the Neighbourhood event. Founded by Sean Lynch and Michele Horrigan, the ambition is wide, and artists come from all over the world on residencies, that culminate in art everywhere – from the petrol station to the graveyard to the laundrette.

Sure some can be highly conceptual, but many are also great fun, and the thing about art out in the open, rather than cossetted in a gallery, is that it has to stand up for itself to be any good. Judge for yourself at this year’s finale as artists including Patrick Hough, Tina O’Connell and Michael Fliri are joined by writers Kevin Barry and Olivia Smith for talks and walks on Saturday July 15th at 3pm.

Ana Maria Pacheco and John Gerrard
Galway International Arts Festival, Galway City Until July 30th giaf.ie
Galway Arts Festival’s commitment to the visual arts is all the more significant when you realise the city is still without a permanent major gallery. This year’s excellent programme includes Brazilian-born Pacheco’s pleasingly disturbing figures and prints at the former printworks of the Connacht Tribune. Given the current state of the world, her dystopianism feels very apt, and the venue is so great it really should be a gallery year-round.

Meanwhile, over at NUI Galway, Gerrard shows four newly commissioned works in his signature Real Time 3D from. Four rivers come to simulated life in the space, including prismatic oil spills, perhaps reminding us of the ultimate price to be paid for the unnatural beauties our modern world craves? Anyone who caught Gerrard’s Western Flag on Channel 4 for Earth Day this year, should be a committed fan. Go see.

Take Five at the Mill
Mill Building, Kinsale, Co Cork Until July 21st facebook.com/takefiveatthemill
What happens when five artists decide to sidestep galleries and curators and take a DIY approach to exhibiting? As the five include Charlie Tyrrell, Katherine Beug and Vivienne Roche, it’s not as if they’re short of mainstream opportunities, but their experiment pays off in the atmospheric converted grain store in Kinsale. Joined by sculptor Sarah O’Flaherty and photographer Stefan Syrowatka, at first the differences seem most apparent, then gentle connections appear.

The uncanny distortions of nature in O’Flaherty’s mini forest are picked up in Beug’s brilliant paintings of wind-shaped trees. Then, all of a sudden, I’m seeing Beug’s lines of light and shade in Tyrrell’s wood wallpieces and drawings. Maybe the mind simply likes to make relationships? Either way, without the guiding hand of a curator, these feel more like serendipities and happy accidents, and it’s a very nice feeling indeed.

Not to be Known - Aideen Barry
Crawford Art Gallery, Cork Until November 3 crawfordartgallery.ie
With the news that Cork has been listed by the EU as the number one city in Europe for cultural venues and facilities, it’s worth checking out what’s going on inside some of its gems. In addition to bringing their award-winning café out into the garden (and who doesn’t love a cuppa and cake after some hefty art viewing?), the Crawford has an excellent programme just now, including What’s the Story, an intriguing exploration of some major history paintings and allegorical scenes, re-examined in the light of our current post-truth age.

It’s highly intriguing, but my highlight has to be Aideen Barry’s brilliant stop-motion film on permanent loop in the screening room, which clearly demonstrates the dangers of getting too personal with your vacuum cleaner. Let that be a warning to you.