‘Squeegee Paintings’, the new exhibition by the former head of painting at NCAD, is all about what's left out 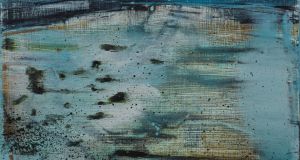 Soon, Robert Armstrong is off to Hong Kong for a spell as artist-in-residence at the Baptist University,  with, all going well, an exhibition at the conclusion of his residency. He has just retired as head of painting at NCAD, a post he had held since 2002 (having been a lecturer in fine art before that). During his tenure, he maintained his own art practice in tandem with meeting academic demands – a good thing for him and for NCAD students, but not something artists who enter the academic arena always manage to do.

Prior to that, besides painting he had extensive experience across a range of creative disciplines, including in what is now known as visual communication, as well as in cartoon illustration and set design in theatre and film. A co-founder of Temple Bar Gallery & Studios, in 1984 he won a GPA Emerging Artist award and set off, circuitously, to Papua New Guinea. His journey also took him to Egypt, India and Malaysia.

These and subsequent travels have certainly fed into his work, but so too have travels of another kind: explorations of painting through history. As time has gone by, meditations on art of the past, especially European painting from the early Renaissance on, have become increasingly present in his own painting – but usually in oblique, selective ways.

Often, in fact, he seems to have looked at past art in terms of its absences or oddities, or focused on aspects of paintings that are not the putative subjects, eliding or dismissing the subject in the process, as in, for example, a 2006 painting, Landscape without Equestrian Portrait of Louis XIV.

Absence, or something like it, features in his current show, Squeegee Paintings. That’s squeegee as used in silkscreen printing. Is there something of a metaphorical act of erasure in the work? A clearing of the decks. Certainly, actual erasure, dragging a squeegee across a paint-laden surface and removing most of the physical substance of the pigment, plays a primary role in the creation process. The painting is what remains, an aftermath. It’s a bold strategy, but he manages it with elan.

It’s difficult to make paintings using a squeegee, and to draw attention to this process by so titling the work, without bringing to mind the German painter Gerhard Richter, who, probably more than any other contemporary artist, has used a squeegee. There is Andy Warhol, of course, but his Factory operatives were actually making silkscreen prints. When Richter moved beyond representation to make abstract paintings, he used several implements besides brushes, including putty knives and, most notably, and extremely, squeegees, sometimes on an enormous scale.

Richter has a knack for seriously annoying the more critical observers of his work – for reasons that are not entirely clear. That he would have the gall to make abstract paintings annoyed many people. That he professes not to understand a great deal of what he’s doing annoys them too. One series of squeegeed abstracts is called the Bach series, and a more recent one the Cage paintings. That’s Cage as in John Cage the composer, and Bach as in JS, the composer. But the connections are not illustrative. It seems that Richter was listening to recordings of Cage’s collected works for piano as he was making the Cage paintings.

In fact, the first Cage painting began with a grid-like monochrome pattern, not unlike some works by Mark Francis (currently showing outstanding work at the Kerlin Gallery), based on mineral microstructures, and became something else entirely. The Cage paintings are more added to than subtracted from in the course of their making. They are masses of intermixed pigment dragged this way and that, usually up and down. They can’t help but suggest associations with landscape: rain, cloud, mist, water.

Armstrong’s paintings are much more subtractive, and he quotes Helen Frankenthaler as an epigraph: “If I am forced to associate, I think of my pictures as explosive landscapes . . .” Indeed, he plays continually on the associations with landscape in his paintings, exploiting the way we try to make sense of an image and look for a way to read it, rather than just letting it be. That ragged profile of green, surely it’s a mountain ridge? Armstrong is adept at planting clues and then disowning them, leaving it up to the viewer to decide.

Speaking of explosive landscapes, back in the late 1990s he visited volcanic sites in the Mediterranean and made a series of paintings that delighted in the molten, fluid, abstracted world he found there, and that state of flux and uncertainty has been a constant in his work since.

The landscape transformed, whether through the magic of biblical narratives – the pillar of cloud, say, which he has recurrently addressed – or phenomena such as the Sri Lankan rock column that was reputedly covered by perhaps the largest fresco painting ever, draws him. Then there was a South Sea island that was in the process of disappearing, year on year, as the sea continues to rise. So the Squeegee Paintings are a logical development, taking us to the point where the waters lap over the last traces of land peeking above the waves.

The most minimal work, Clearing, for example, is incredibly spare – the squeegee has cleared away nearly all pigment, leaving a trace, a memory in the gessoed weave of the linen – but it is seething with energy nonetheless.