Don McCullin: Photographs you can’t look away from 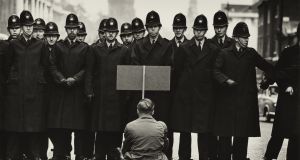 Iconic is too over-used an epithet to sum up Don McCullin’s photographs of deadly conflict zones around the world, let alone do justice to the impact of seeing them.

Even if not associated with his name, his images are now part of the public consciousness of violent events from the recent past: the Troubles, Vietnam, Biafra and Lebanon. But McCullin dislikes being categorised as a war photographer, describing the term as being like that of abattoir worker.

Great documentary photographers share an intuitive ability to freeze-frame one moment from a fluid situation that then embeds itself in our collective memory of the larger event.

Ironically, what alerted a picture editor to McCullin’s talents when he saw The Guvnors (1958) was the very opposite. The theatricality of this picture is pure stage management: the wannabe gangsters pose purposefully, adopting stances from insouciance to menace, creating a mise en scène that any theatre director would die for as the opening to an edgy, working-class drama.

What resembles a stage set are dwellings bombed in the second World War and the shot was taken on McCullin’s home turf, Finsbury Park in north London. He had bought a camera from his pay during a spell of national service which introduced him to the basics of the photographic print process.

McCullin had gone to school with wide boys who joined gangs and, when a member of a particularly notorious one was implicated in the killing of a policeman, his photo was snatched up by The Observer newspaper.

McCullin knew from the inside the deprived environment of Finsbury Park and in a recent interview with Tate Britain in London to coincide with a major retrspective on his work, he recalled how at weekends a lorry would back up and tip a pile of secondhand clothes on to the pavement, “like a plate of spaghetti”. He remembers how his mother would “dive in and pull out stuff”, taking it home to wash and have ready to wear to school on the Monday.

In 1961, after seeing a photograph of an East German soldier jumping over barbed wire into West Berlin, McCullin took a trip to the city on his own initiative. When he returned and showed his photos of what had become breaking news, his career as a photojournalist was launched.

Travelling the world’s trouble spots, his candid photographs awed newspaper readers. Images of the Vietnam War, the turmoil in Northern Ireland, the bloody conflict in Cyprus were brought into the living rooms of a public unprepared for such realism. Seeing again the harrowing shots of starvation in Biafra remains heartbreaking. He says he wanted to force a question on people – “Why am I looking at these terrible images like a child starving in a world where there is too much food in the West?”.

What is clear from the Tate Britain exhibition is his deep-rooted concern with class impoverishment; between dangerous assignments in war zones – on show in the exhibition is the Nikon camera which in Cambodia took a bullet for him – he photographed working-class life in London’s East End and in the north of England. In their haunting grimness, they point to what he called “a social war”, one not taking place on the other side of the world.

McCullin was born in 1935 and his commitment to photography is undiminished: “Just because I’m 83 doesn’t mean to say I have to sit here waiting to die. I’m still open to discovery.”

His later work, still-life and landscape photography, is in the last room in the exhibition. But the itch to take off to trouble spots is still there and an ongoing project, about Roman remains in north Africa and the Middle East, has taken him to Palmrya to record the damage inflicted by Islamic State fighters. He speaks of the compulsion to travel to unhappy places as an illness he can’t shake off and of a darkness inside him which he traces to his childhood. However metaphysical this might be, there is a literal darkness to the tonality of his photographs that comes from his own printing of every one of the 250 images in this exhibition.

The scope for photojournalism to arouse empathy for the sufferings of others is narrowing and, paradoxically, the staggering quantity of images being globally disseminated every second is part of the reason. Images rain down on us but the ability of individual ones to demand attention and disturb our equanimity may be weakening.

The days when a photojournalist’s pictures could appear over six pages of a Sunday magazine are long gone but seeing them again renews the visceral presence of suffering and sorrow in his pictures.

This is testimony to his achievement, as is the superb photobook, Don McCullin by Aïcha Mehrez and Simon Baker, published for the exhibition. McCullin’s work constitutes what Roland Barthes defined as a photograph: a message without a code. All you need to know is there in his pictures.

Don McCullin Retrospective at Tate Britain, until May 6th, tate.org.uk